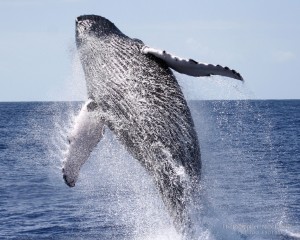 Whale watching in Hawaii is an extremely popular activity if you’re visiting Hawaii during the winter. Each year, thousands of humpback whales make the 3,000 mile journey from Alaska to Hawaii in order to breed and to raise their young.

Because the annual migration is seasonal, whales can only be seen a few months out of the year. So, if you are set on wanting to do some whale watching in Hawaii, you might want to plan your vacation around the prime whale watching season. The best time to see whales in Hawaii is from December to April.

The most popular way to observe these majestic creatures is on a whale watch or snorkel cruise, but it’s not uncommon to be able to see them from shore as well.

You may be able to see whales at just about any spot around the island if you’re lucky, but if you want to increase your odds try popular lookout spots on the south or eastern side of the island, such as Makapuu Lighthouse, Halona Blowhole lookout, the Diamond Head lookouts, or even Hanauma Bay. A complete list can be found here.

Maui is probably one of your best bets for whale watching both from shore or on a cruise, especially on the west and south shores. The entire drive between Kihei or Kahului to Lahaina will provide numerous sightings during whale season, and you’ll find lookouts where you can park to watch from shore. Molokai and Lanai are also great for viewing whales.

Whale Watching on the Big Island

In Hawaiian, humpback whales are called kohala, so it comes as no surprise that the Kohala and North Kohala coasts are popular viewing points for whale watching, including the Puukohala Heiau. Whales can be seen from Hilo as well, and numerous whale watch cruises and charters depart from Kailua-Kona during whale season.

Popular whale watching spots on Kauai include from the Kalalau trail or Kilauea Lighthouse on the North shore, the Kapaa lookout, or even Poipu beach. Details for some of these locations can be found here.

>> If your travel dates allow, you might also want to consider being a volunteer for the annual humpback whale count, which helps with research and conservation efforts for these beautiful animals.