Aloha to everyone. I’m Lisa, and this is my very first post. Instead of ushing and gushing about how happy I am to be here talking with you, I think I’ll just share last night’s sunset sky with you. I took my two dogs for a walk and was fascinated by the sky just before dusk (about 6:15). See, I live on the Eastern side of the Big Island so I don’t see a sunset over here. Although the sky is almost always pretty, last night it was … phenomenal.

The ocean itself was kind of a dark steel-gray and mostly wave-free. It stretched gently out to the horizon and where it met the sky there was a slightly darker band of gray. The sky itself started out a light shade of pastel blue, like a color you might paint a baby’s room. The farther up the sky went, the darker blue it got. It turned indigo, and then started lightening again to a beautiful violet, and then light pink color. The pink color faded into normal blue sky above. In places, there were bold streaks of indigo shooting up at 40 degree angles. All of this color was dotted with faded cumulous clouds that were quite overpowered, but still pretty in their own right. It was amazing. I walked almost a mile without taking my eyes off the horizon (and probably with my mouth open).

I’m not sure what caused these beautiful colors, but I think it might have had something to do with the almost full moon also visible in the sky in the direction I was walking. I promise I’ll take my camera tonight, just in case it looks like that again.

If you find yourself in or near Hawaiian Paradise Park on the Big Island, a fantastic place for morning or evening walks is the county park along Beach road because the road is blocked to vehicle traffic along part of it, and vehicle traffic is light on the rest of it. FYI, It’s a rocky, red-dirt road with no beach access – only 15 foot cliffs and unobstructed ocean views for a little less than a mile (then the houses start and block your view). Go down Paradise Drive and take a right on Beach Rd. Park your car where it can be seen from the road further down. Or, go down Makuu Drive and take a left on Beach. Park anywhere. I’ll be the one with the big black lab/chow mix (Bear) and the tannish chow/husky/golden mix with the blue eyes (Belka). I may also or instead have an exuberant and beautiful towheaded 3-year-old boy with me. Either way, say hi!

next day edit to add: Ok, I went back last night and took pictures. The sky was not anything like it had been the night before. 🙁 My new theory is that the sky always looks like that at sundown, but our ever-present tradewinds ensure constantly obscuring clouds. The last few days, our tradewinds were absent, but last night (when I took these pics) they were back. Here’s pics of last night’s normal sunset. The first one was around 6 and the second around 6:30. It’s colorful, but nothing like it was the other night. 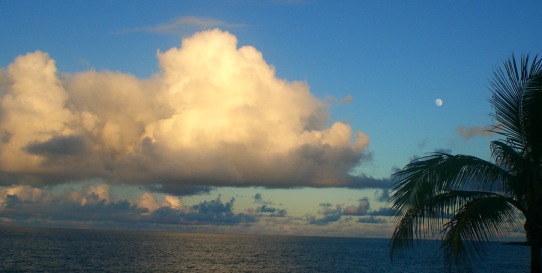 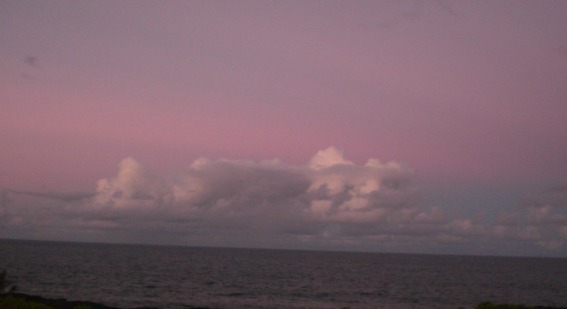 So, how about you? Is Hawaii the source of the most beautiful sunsets you’ve ever seen? Care to share?