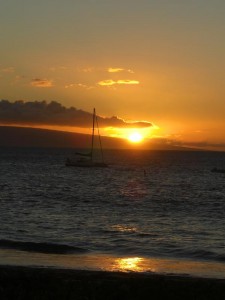 To say that Hawaii is blessed with some of the best weather on the planet is truly an understatement. There are no extreme hot or cold periods, and over the course of the year the average temperature only varies by about 10 degrees or so. Year-round water temperatures average about 74 degrees.

In Hawaii, there are really only two seasons. In fact, many mainland transplants say that if they miss anything at all, its the changing of the seasons. My mother used to talk wistfully of a white Christmas for a minute or two, only to snap back to reality realizing that she didn’t miss scraping the ice off her windshield one bit!

Winter in Hawaii is typically considered November through April. In the winter, temperatures will get a bit cooler, so make sure to bring along a light sweater, especially if you’ll be at higher elevations. Winter is also the rainier period in our yearly weather cycle, so bring your umbrella and get ready for lush green mountains and lots of rainbows. Average temperatures in the winter are typically around 78 degrees. Winter is known as Hooilo in the Hawaiian Language.

Summer in Hawaii is generally May through October and will be drier than the winter. Temperatures get a bit warmer, but still nothing extreme. Getting into the low- to mid-90’s is really hot! The tradewinds that serve as our natural air conditioning tend to keep the temperatures pleasant, so if the weather calls for calm winds, be prepared for it to feel a few degrees warmer outside. Summertime average temperatures hover around 85 degrees. Summer is known as Kau in the Hawaiian Language.

Depending on what part of an island you’re on, you could be getting the full effect of the winds that carry the most moisture, or you could be on the opposite side where it’s predominantly dry. “Windward” refers to the areas which face those winds, usually the north/east, and “leeward” refers to the areas which face away from the winds, generally west/south. The other winds to be conscious of are the trade winds, which can produce a cooling breeze even during the hottest periods – or bring hot and stormy weather from the other direction.

Keep in mind, elevation change will cause the temperature to change, so if you’re planning to do anything besides lie on a beach at ocean level for your entire trip, you’ll want to be aware of the different weather conditions on the volcanoes or in the canyons. As you’re going up the mountains, the temperature can drop significantly and the sun’s rays are more intense, so be prepared with proper clothing and sunscreen. People never believe me when I tell them that I wear a down jacket to go watch the sunrise at the summit of Mt. Haleakala, but it’s true!

For reference, here are the average temperatures and precipitation for the state capital, Honolulu.

Although hurricanes are quite rare, you will want to be aware of the face that hurricane season runs from June through November in Hawaii. The last major storm was Hurricane Iniki, which caused significant damage in September 1992, especially on the island of Kauai. You have a much better chance of getting beautiful weather than going through a disaster like a hurricane, but it doesn’t hurt to brush up on hurricane preparedness tips for peace of mind, if nothing else. In the unlikely event of a hurricane or other natural disaster, stay tuned to local news and radio for the latest info.

Each month brings with it specific holidays and events as well, so check out the individual guides for reference:

>> More information on When to Go to Hawaii.

>> Want to see for yourself? Check out interactive webcams all over the state for current conditions.

>> Because Hawaii weather changes frequently, it’s good to check the local news. My favorite is Hawaii News Now. Our nightly news will also feature a surf report, which shows just how ingrained surf culture is in Hawaii.