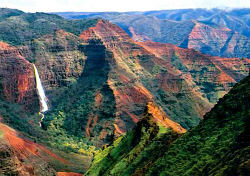 Easily one of the biggest attractions on the island of Kauai is Waimea Canyon – it’s been called the “Grand Canyon of the Pacific,” and when you see it you’ll understand why. It’s more than 10 miles long, 1 mile wide and 3,000 feet deep – and the rosy, warm colors are reminiscent of the Grand Canyon on the mainland. But Waimea Canyon has one big thing that its mainland counterpart could never boast – proximity to world-class surfing.

Like the Grand Canyon in the American Southwest, Waimea Canyon was formed by a river – the Waimea River – over millennia. But unique to Waimea Canyon, the whole process was aided by a major collapse in the earth during a massive volcanic eruption. The same volcano which created the island of Kauai itself also helped create the rift which became the Waimea River bed. And because the island’s highest peak, Mount Wai’ale’ale, holds the distinction of being one of the wettest places on earth, the river was fed by a steady – and heavy – diet of rainfall, which helped further cut into the earth and create Waimea Canyon.

Today, Waimea Canyon is part of a state park which covers almost 1,900 acres with lots of great hiking trails at all experience levels and a wilderness area. You can get to many great lookout spots from your car, too, if you don’t feel like getting your feet dirty. But if you’re planning to do a lot of driving to see the canyon, be aware that there aren’t any gas stations along the 40-mile stretch of Waimea Canyon Drive – so be sure to start with a full tank!