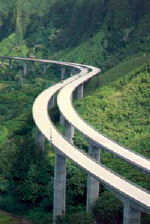 Usually when you think about visiting a state, or even a whole region, you can make spur-of-the-moment decisions about where you’ll go that day and what you’ll see. When you visit Hawaii, things aren’t so simple – especially if you plan to visit more than one island. Here are a few things to know about transportation in Hawaii.

Oahu’s got TheBus, which is fabulous and will get you pretty much anywhere on the island that you want to go. It saves you the expense of renting a car, and the hassle of navigating your way around unfamiliar roads. Public transportation on the other islands, however, pales in comparison. Maui has a very limited bus network, but it’s no good if you want to get off the beaten path. If your home base is anything other than Oahu you’d be better off renting a car to get where you need to go.

Flying between islands is usually your best option.

This may sound crazy for a series of islands, but for various reasons there aren’t any good and inexpensive ferries that link the Hawaiian islands. Some passenger ferries exist between Maui, Molokai and Lanai. There was briefly the Hawaii “SuperFerry” which linked a few of the main islands but that company is now defunct, so you’re better off sticking to air travel. Short hopper flights, on the other hand, make it easy to take even day-trips to other islands, and flights between the islands are extremely quick, although a bit expensive.

A guided tour is often an easy way to get around.

You can sign up for any number of expeditions, tours and day-trips that will take care of the transportation for you, both between islands and once you’re on another island, which can relieve some travel stress for you. Even if you’re just staying on one island, you can sign up for “circle-island” tours that will allow you to see other parts of the island you’re already on without renting a car (provided that you don’t mind sticking close to your hotel for the rest of the time). A tour like this isn’t recommended, however, on the Big Island because it’s so, well, big.

It’s often not enough to just have your own car, because some of the attractions and sights – not even the out-of-the-way ones but the main ones as well – require the use of 4WD vehicles to reach them. This is especially true in parts of Maui and Lanai.

If you aren’t renting a car, make sure your hotel has a shuttle service to and from the airport.

At the very least, you’ll need to get from the airport to your hotel and back again, so if you’re planning to spend your entire Hawaiian vacation lying on a beach with no thoughts of renting a car or hopping on a bus, you’ll just need to make sure you’ve got airport transportation covered.

Why rent a car when you can rent a motorcycle?

If you’re licensed to drive a motorcycle, that can be a fun alternative to renting a car to explore the islands. You may not be able to access areas which are limited to 4WD vehicles, but you’ll also have the thrill of the wind in your hair as you zip from beach to beach. For shorter trips, you can also rent a scooter, which may not require special licensing.

Don’t forget to budget for the high price of gasoline.

Gas in Hawaii is more expensive than just about anywhere else in the U.S., so avoid sticker shock and prepare to pay more than you’re used to.

Taking a multi-stop Hawaiian cruise is another good way to see more than one island.

Not only will a cruise in Hawaii get you from island to island as part of the deal, you only have to unpack once.