Hawaii is often referred to as a mixing pot of cultures, with various waves of immigrants bringing new ingredients and styles of cooking to the islands. Today, Hawaii is home to many world-class hotels and resorts, creating a demand for innovative cuisine using the freshest local ingredients.

But traditional Hawaiian food deserves a turn in the spotlight as well. So much of our island heritage comes from traditions dealing with sharing food and providing for your family, or ohana. Hawaiians respected both land and sea and the traditonal ahupu’a system of land division from ocean to sea meant that their diet included crops such as taro, banana, and sweet potato, as well as proteins like fish, pig, and chicken.

Foods traditional to the ancient Hawaiians can still be found in Hawaii today, and although you could get a small taste of these foods by attending a luau, if you are looking for authenticity, you will do better to search out the places where locals go to eat them – home kitchens, backyard luaus, and hole in the wall restaurants where traditions are carried on and passed down through the generations. 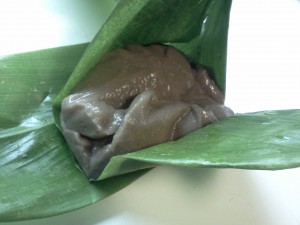 No discussion of traditional foods of Hawaii would be complete without taro, arguably the most important part of the Hawaiian diet. Taro is one of the worlds oldest cultivated crops, arriving in Hawaii with the earliest Polynesians. In order to turn the taro into poi, it was often steamed in the imu, then mashed with water and pounded into a paste called pa’i’ai. (see photo at right.)

The pa’i’ai would be stored to dilute into batches of poi as needed. The leaves of the taro plant can also be used in cooking, and will be found in popular dishes today such as lau lau (where they take on an almost spinach like consistency) and chicken or squid luau (a stew made with coconut milk.)

Until the recent law passed in June 2011, it was illegal to sell hand pounded poi or pa’i’ai in Hawaii because of health department restrictions. This is quite a shame because hand pounded poi tastes far superior to the commercially produced poi you are able to buy in the grocery store or that you may have tried at a luau. The local company Mana Ai now ships hand pounded pa’i’ai worldwide and it will definitely be easier to find it here in Hawaii as the tradition is passed down to the younger generations.

Most people think of pig as the most common meat hunted and eaten in Hawaii. It is true that lau lau and kalua pig steamed in an underground oven, called an imu, are definitely traditional hawaiian foods that are still quite popular today. Chicken, wild goose, hen, duck, and even dogs were also raised for food and cooked in the imu or over hot coals.

The Hawaiian Islands are home to many types of seafood and the ancient Hawaiians enjoyed a diet rich in fish (steamed, broiled, salted, or eaten raw) as well as other sea animals like opihi (limpets), crabs, sea urchins, turtles, as well as many types of seaweed. Hawaiians fished for their seafood and also built fishponds in order to raise fish, such as those found on the south shore of Moloka’i. Today at a luau or special occasion, you will often see opihi, poke (cubed, seasoned raw fish) and whole fish as special dishes.

Poi, fish, and other meats were important to the Hawaiian diet, but they were also supplemented by crops such as banana, coconut, and breadfruit. Many of these were imported by the early Polynesians, but there are also indigenous berries such as the ohelo and akala berries. Today you will find a variety of tropical fruits in Hawaii that may not have been familiar to the ancient Hawaiians, including pineapple, mango, papaya, guava, and more. Because there were not many vegetables cultivated in ancient Hawaii, the main source of greens were taro leaves. Young fern shoots, sweet potato, and seaweeds (called limu).

This list was meant to be focused more on foods traditional to the Hawaiian people, but if you are looking for what types of foods are popular in Hawaii today, including those influenced by the various immigrant groups who came to work on the sugar plantations, check out our article on Drinking and Dining in Honolulu.

Here’s a great video of the type of imu still used by local families today for special occasions and holiday luaus: