The Legend of Duke Paoa Kahanamoku 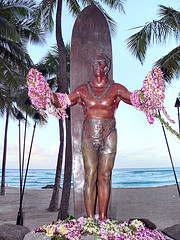 For anyone who has or will visit Waikiki Beach in Honolulu, Hawaii there is something that can not go unnoticed. Walking down Waikiki Beach it is impossible not to notice the huge, pink building named Duke’s Canoe Club. Directly next door you will find Duke’s restaurant. Whether you feel like stopping in for a fabulous bite to eat or to catch some live music at the barefoot beach bar, or just want to be curious, visitors should all stop in.

At Duke’s you will find great food and Hawaiian history in one stop. The walls are covered in photographs, news clippings, and other mementos from Duke’s past and the culture of the people. The walls at Duke’s tell a story, the story of Duke Paoa Kahanamoku, “the Father of International Surfing”.

Duke Paoa Kahanamoku is Hawaii’s most legendary and beloved citizen. He was born in Honolulu in 1980 and grew up on the white sands of Waikiki Beach. At age 21 he won his first gold medal at the Olympics in swimming. From there, he continued to compete in the Olympics representing the United States as a swimmer for 20 years. He continuously won trophies and medals and the hearts of people world wide.

Duke was known as a phenomenal athlete with great courage and sportsmanship as well as a humorous, charming, and graceful young man. He continued to surf and swim for all his years to come even before surfing was considered a competitive sport, or even a sport at that. His accomplishments as a surfer were what catapulted the sport to the levels at which they are now. He became legendary as a surfer.

Not only was Duke a man of many athletic achievements and heart, but he was also a Hollywood movie star. Because of his personality and good looks, he was cast in 28 movies and even appeared alongside John Wayne in ‘the Wake of the Red Witch’.

As Duke aged, he was deemed Hawaii’s Ambassador of Goodwill and the Aloha and Honolulu’s Official Greeter. Three years before his death he became the first person to be inducted into both the swimming and surfing Halls of Fame. When Duke passed away he was recognized globally as a symbol of Hawaii. Still today, his legend touches the hearts of people everywhere.

Because Duke Paoa Kahanamoku is such an important part of Hawaiian history and of surf culture, statues of him have been resurrected all over the globe, including Waikiki Beach. While visiting Waikiki, one should visit Duke’s if only to have a look around and greet him with an “Aloha,” just as he did for so many years.

“In Hawaii we greet friends, loved ones or strangers with Aloha, which means with love. Aloha is the key word to the universal spirit of real hospitality, which makes Hawaii renowned as the world’s center of understanding and fellowship. Try meeting or leaving people with Aloha. You’ll be surprised by their reaction.”

“I believe it and it is my creed.”

Trivia:
…I bet you didn’t know, the animated movie “Surf’s Up” is based on Duke’s legendary life…