Swim With Dolphins in Hawaii 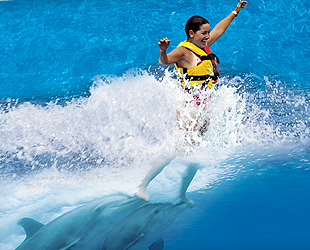 Sea Life Park is a top dolphin swimming park.Anyone who does not thinking swimming with the dolphins would be insanely cool is seriously confused. Whats not to like about fulfilling your flipper fantasy and being jetted around the water by holding onto a dolphins fin or skiing the waters surface thanks to the two dolphins pushing you upwards. While vacationing in Hawaii, you have a prime dolphin swimming destination close by. Hawaii’s

Sea Life Park is located on the island of Oahu. Sea Life Park has one of the largest and most impressive marine animal attractions on Oahu. Their staff of professional animal trainers, biologists, and researchers aim to educate and inform the general public about marine life and its well being.

The Dolphin Royal Swim package lets you do more than just get in the water with the dolphins. This package includes a dolphin kiss, handshake, dorsal fin swim, deep water interaction, and a foot push. The foot push is where the dolphins jet you across the water from the bottom of your feet.

Other Dolphin Swimming Programs Include: