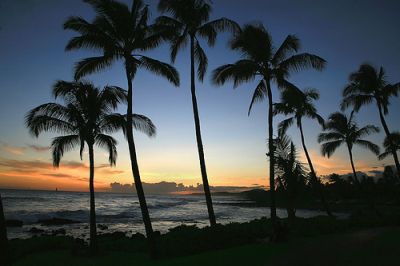 If you’ve been up on your travel news at all lately (or any news for that matter), you’re quite aware that travel to just about anywhere is way cheaper this year than it has been in a long time. With many Americans scaling back family budgets in light of the current economic situation, travel has seemingly been the first thing to go for many. This means that fares are way down and many hotels are offering cut-rate rooms, free nights and more. Some resorts are even offering cash back and resort credit to encourage more people to pack up their bags.

Among the places that have been hardest hit by the economic slowdown (and therefore has some of the best deals out there) is Hawaii. I have been watching airfares from the West Coast especially continue to fall and I’ve been amazed at how easy it is to get cheap flights to Hawaii. While there has been plenty of buzz about cheap summer travel to the islands, I was surprised to see that some of the red hot Hawaii deals are lasting well into the fall. This means that just when you are starting to mourn the end of summer, you’ll be able to score a deal on a cheap airline ticket and head for paradise in the Pacific.

I read earlier this week on the LA Times Daily Travel and Deal Blog about remarkably good fall fares to the islands. According to the LA Times, you can get round-trip airfare from Los Angeles (LAX) to Honolulu (HNL) for as little as $214 round-trip (including tax) through Dec. 16. While not all fares you find will be THAT cheap, a few internet searches should find you round-trip fares from LAX for under $300 round-trip. When it comes to getting a deal on a cheap air ticket, that’s probably one of the best ones you’ll find out there right now.

Airfare to Hawaii isn’t the only thing that’s cheap these days. Hotels and resorts all over the islands have been rolling out some pretty fantastic deals in an effort to lure more travelers to Hawaii. Not only are many resorts offering up free nights and extra perks, but with so many places offering free nights and discounted rates it is pretty easy to find a cheap hotel in Hawaii right now.

In an effort to drum up business worldwide, Marriott hotels announced earlier this week that they would be kicking off a “free night” promotion for about 300 of their participating hotels and resorts—including their properties in Hawaii. While Marriott certainly isn’t the only hotel to be handing out free nights and extra perks for those traveling to the islands, checking out the promotion at Marriott is probably worthwhile for those looking to arrange a budget trip to Hawaii.

While fares to Hawaii are down in general, you can get still get the cheapest airfares to Hawaii during the shoulder seasons and by traveling on weekdays. For more tips on getting a great airfare to the islands, read my interview with Keoni Wagner of Hawaiian Airlines about his tips for getting the best deals.