My son and I spent a long, enjoyable afternoon at Spencer Beach Park on the Kohala coast of the Big Island of Hawaii. Let me share it with you. 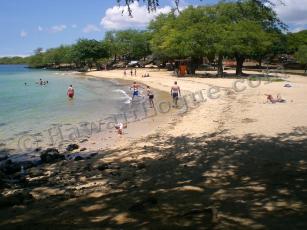 Spencer beach is a medium-to-small sized, crescent-shaped, white-sand beach. Large trees mostly on the beach provide plenty of shade on both ends of the beach and along the back. There are picnic tables, showers, bathrooms, some barbecue grills, a basketball court, and a pavilion.

Camping is allowed here. There were dozens of tents set up. Some families even had tarps set up with their tents gathered around the tarps. We spoke with a mother and daughter camping alone from New Jersey. They had been there for one week, and were still spending most of the day in the water.

Joseph and I spent about four hours hanging out in the water. Joseph has played in the surf that washes up on the sand before but never really let the waves take him. (he’s 3) The surf at Spencer’s is very gentle and he was comfortable going out up to his chin — letting the waves gently move him around. Close to shore the surf was more rough and tumble, while still gentle enough for a three year old. Joseph liked me to lay in the sand with him on my back. He’d try to stay on while the surf tried to knock him off and roll me over. Big giggles for staying on and upright, and bigger giggles for getting knocked you-know-what over you-know-where. We had a fantastic (but very sandy) time.

We also caught small fish with a net I brought. Nets are two or three dollars at Wal-Mart or Longs. Tiny fish are easy to spot and catch skimming just under the top of the water or in the rocks on the side of the beach. We kept them in a juice container for about an hour and then let them go.

All things considered, I name Spencer’s my favorite beach on the Big Island for younger kids. I think the easy access to lots of shade and the very gentle waves put it on top. This is not to say that those without children won’t enjoy yourselves. You will – the view is amazing and it is one of the nicer camping beaches on the island. There are not screaming children running everywhere. In fact, during the week, this beach is very lightly used. On the weekends, it does fill up with local families, but that’s just right. 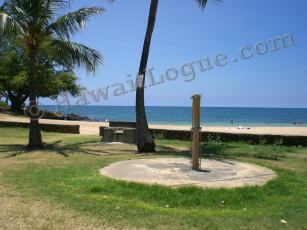 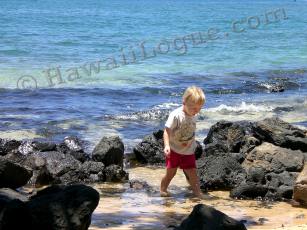 the rocks along the right side 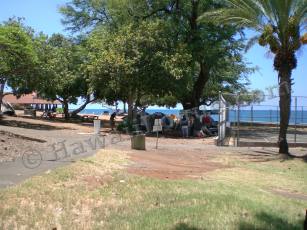 the pavilion and basketball court area 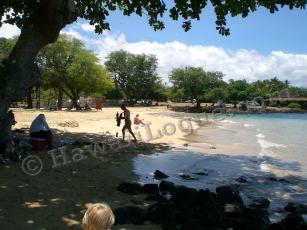 View from the right side of the beach