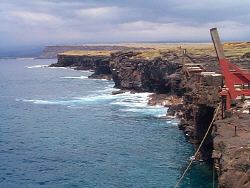 Visitors to Hawaii are already probably going to feel worlds away from the United States mainland, but just to emphasize that feeling, why not make a stop at the southernmost point in the country? Take a trip out to Ka Lae on the Big Island and be further south than any other place in the USA.

In Hawaiian, Ka Lae translates into simply “the point,” but it is also commonly known as “South Point,” for obvious reasons. There is not a town on this site, as it is made up of rocky cliffs and very difficult to access, but it is a very popular fishing spot! Swimming here isn’t recommended, however, because of the powerful currents. Though people don’t live on Ka Lae now, it is the site of some of the earliest settlements on modern-day Hawaii dating back to 200 A.D. Today, the “residents” are mainly restricted to the wildlife that comes here to feed and give birth.

Because of the high winds which regularly circulate through Ka Lae (which are largely responsible for the currents that make swimming dangerous), the area is now also home to a wind farm. The winds and currents have made this part of the Hawaiian coast the collection point for much of the litter that washes up onto the shore, but gathering it up is difficult, so it doesn’t always look very pretty.

So, should you visit Ka Lae? It’s entirely up to you, of course, but given the combination of horribly high winds, difficulty in accessing the coast, and collection of garbage – it’s probably something you can skip without worrying that you’re missing something special. Of course, if you’re one of those people who gets giddy when you stand on the Equator or South Pole, then maybe the southernmost point in the US is right up your alley.

How to Get There: Accessible via South Point Rd., which is off State Highway 11 (the turn off for South Point Rd. is roughly seven miles west of Na’alehu). For more specific directions, see this page.