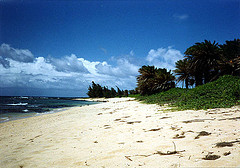 The history of Hawaii began about 600-700 AD with a migration of polynesions from other islands in the South Pacific. Since that time, waves of people and ideas have come to the islands and contributed to a rich and everchanging culture. The history of Hawaii is unique in that Hawaii has been a group of warring island kingdoms, a monarchy under one ruler, a European territory, a republic, and a territory and state in the United States. During all these stages in its history, Hawaii has grown and changed while still retaining a culture it can call its own.

The formal history of Hawaii began January 20, 1778 with the “discovery” of Hawaii by Captain James Cook. He renamed the archipelago the Sandwich Islands after the British Earl of Sandwich. Prior to his arrival, there were no written records. History was passed down through oral traditions.

The kapu system cemented the Hawaiian society into a caste system similar to that found in India. The word kapu, pronounced taboo in English meant sacred or prohibited. It permeated Hawaiian society from the highest to the lowest levels with strict rules concerning every known type of behavior. A commoner even had to be careful not let his shadow fall across someone of higher rank. This system was struck down by King Kamehehe II when he sat down to eat publicly with his mother and other noble women, a practice forbidden by kapu.

In 1820, missionaries from Puritan New England began to arrive. As many Hawaiian people had already begun to question their old religion, it did not take long to convert some 20,000 to Christianity. These missionaries created an alphabet and produced the first works written in Hawaiian. They were also the first to perform a census and helped strengthen the monarchy to keep Hawaii independent.

In 1893, the Queen lili’uokalani surrendered to the United States, under protest. Everyone thought that Hawaii would be annexed by the U.S. immediately. This did not happen. However, in 1898 Hawaii was annexed and became a territory. In 1959, Hawaii became the 50th state.