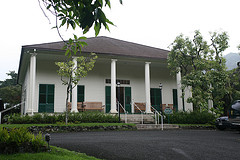 It was constructed in 1841 by a part Hawaii’ian businessman named John Lewis who bought the property directly from the Hawaii’ian Government. Both the homes siding and frame were actually cut and formed in Boston before being shipped to Hawaii thru the Cape Horn, South Africa shipping route. A blend of Hawaii’ian and East Coast styles, the home is one of the few examples of Greek Revival construction left on the island.

John Young II purchased the home in 1850. He was Queen Emma’s uncle and he purchased the property for $6,000, proceeding to name it Hanaiakamalama since his ancestral home in Hawaii was named that as well. In 1857, the childless John Young willed his home to his niece.

And after his niece Emma died in 1885, the Hawaii’ian Monarchy purchased it. Then, when plans of turning the home into a park were seen as threatening to its historic nature, the Daughters of Hawaii decided to restore it and even located some original furnishings to put back in the home. As of today, the museum holds furnishings, memorabilia, artifacts and Queen Emma’s belongings. The Palace is maintained and managed by The Daughters of Hawaii using gift shop sales, admission fees, grants and donations.

From Waikiki to Queen Emma’s Summer Palace:
Using the Bus: Take the #4 Nuuanu-Dowsett bus and proceed to Pali Highway (Route 61) which fronts the Summer Palace. To return, cross the Pali Highway and get on the #4 University-Waikiki bus. During the weekdays, buses will run roughly 15-20 minutes apart. This is less frequent on weekends and during the evening.

Via car: Proceed on H1 westbound. Next, take the Route 61 (the Pali Highway) exit and begin to look for Queen Emma’s Palace on the right hand side of the road just after Ahi Place.