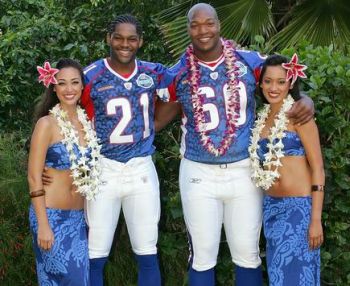 Held the week after the Super Bowl, the Pro Bowl pits the NFL’s best AFC players versus the best NFC players (as voted upon by fans, players and coaches) and since 1980 the major event has been held in Aloha Stadium in Honolulu. Now, some may claim that the event is held in Hawaii because the isles’ still oh-so-pleasant weather in February, but I personally think it’s a pretty great excuse for players, coaches and fans to get in a sweet vacation to Hawaii for one last football blowout for the season.

However, while the tradition of a Hawaiian Pro Bowl has held for nearly 3 decades, it has been reported recently that the NFL actually intends to move the Pro Bowl to the Super Bowl host city and host it one week before the Super Bowl (I imagine the reasoning behind this is to sell more tickets). Sorry, Pro Bowlers, looks like 2009 may just be your last chance to hang out on the beach post season.

While the NFL has not confirmed this news, Hawaii’s governor and Honolulu’s mayor have both confirmed the move. Pro Bowlers playing in the Super Bowl will not play in the Pro Bowl.

The Pro Bowl has long given a boost to Hawaii tourism and the Hawaii Tourism Authority has been lobbying for an extension with the NFL. However, the decision was made to in fact move the Pro Bowl to Miami and have it played one week prior to the 2010 Super Bowl.

According to an article in the Houston Chronicle, Hawaii Governor Linda Lingle said in a written statement:

“While I am disappointed the Pro Bowl likely will not be played in Hawai‘i in 2010, I respect the NFL’s decision to play the post-season all-star game in the same city as the Super Bowl, one-week before the Super Bowl, on a one-year test basis. The senior leadership of the NFL told me explicitly that their decision had nothing to do with anything the state did or did not do, but was an opportunity to try something they had been talking about for years.”

For those wanting to attend possibly the LAST Hawaii Pro Bowl, there are many travel companies out there offering Pro Bowl travel packages for eager fans

With the recession in full swing and with fewer people headed to Hawaii this year, fares to the archipelago are also remarkably cheap right now. In fact, there is a continued fare war between Hawaiian airlines and newcomer Mokulele Airlines.

Want to score a great deal on a deal to the islands? Check out a Hawaiian Airlines representative’s tips on finding great deals or check out some hot Hawaii travel deals.