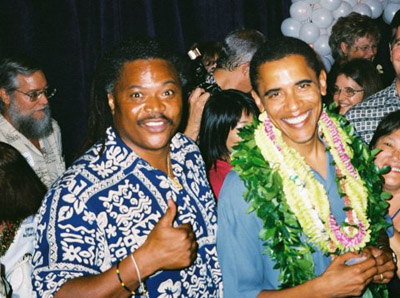 As Obama quickly gained national attention in his bid to become the next President of the United States, there immediately started to pop up Obama tourism in Hawaii. Trying to profit from the immense popularity of the new American political figure, tour operators began offering up packages that showcased some of Obama’s birthplace, childhood hangouts, the apartment he shared with his grandparents and more.

This certainly isn’t the first time this has happened. The same thing happened in Plains, after President Jimmy Carter was elected and to Crawford after George Bush took up residence in the White House.

However, in a place that is already a major tourist destination like Oahu, there has been a veritable onslaught of Obama based tourism.

There are now several different operators offering up tours of Obama’s Hawaii—from the places he most recently stayed during his 11-day vacation to the islands in January to the ice cream shop he worked in as a teenager.

Whether you are a Presidential history enthusiast, Obama-maniac or simply would like to enjoy a guided tour of the USS Arizona and Pearl Harbor by the same guy who showed Obama around the site in early 2009, than signing up for an Obama tour may be a great way to experience a different slice of Hawaii.

Visitors will be taken on a deluxe transportation tour to key historical locations and learn of the special events and the Hawaiian culture that has played a key role in shaping President Obama’s life. Guests will learn of Hawaii’s very special history and unique culture of family values, respect for neighbors, and the wonderful diversity and inclusiveness of our communities. This tour is sure to give you extraordinary stories that can be shared for a life-time.

*Offerred on Mondays, Wednesdays, and Fridays

Lead by “Guide of Oahu,” this tour explores Obama’s roots and as guests tour the island they will see where Obama went to school, lived with his maternal grandparents and where he worked at his first job.

According to the web site, “your journey will take you to places of natural beauty, or cultural and historical significance, such as downtown Honolulu, Chinatown, and a visit to Punchbowl National Memorial Cemetery of the Pacific, where Barack Obama’s Grandparents will be interred.”

This tour was recently featured on Good Morning America and is an all-day tour around Oahu showing you all of the major Obama places of interest.

>>Visit hawaiiobamatour.com to book and get more information

If you are curious about seeing a few of the places on most of the Obama tours—like where he lived, worked his first job etc., but aren’t sure how you feel about dedicating w whole day in Hawaii (I mean, there are beaches to be laid on, mai thais to sip and waterfalls to visit), then you may want to opt for a self guided Obama tour. That way you can skip what doesn’t interest you and hit the hot spots you are dying to check out.

There is a fantastic web site called Obama’s Neighborhood, which has a self-guided Oahu Obama Tour, complete with a map and detailed descriptions of each site and why it is important.

There is also a complete web site full of lots information on Obama Tours in Hawaii that can be found at official Hawaii Tourism website gohawaii.com