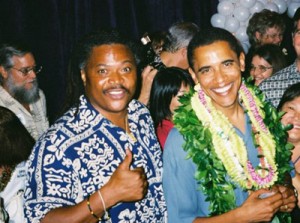 Thousands of tourists flock to the sandy beaches and dramatic shorelines of Hawaii each year, and in recent days none other than President-elect Barack Obama has joined those flocks. The future president, who grew up in the islands, has spent the past 11 days hanging out on the island of Oahu—playing golf, going to the beach, visiting old friends, and visiting military bases and sites like the USS Arizona Memorial. However, what is most interesting about the future president’s Hawaiian vacation is not so much what he’s doing while he’s down there, but what will come of his visit to the state where he was raised.

Locals here sometimes call Barack Obama a kamaaina, the Hawaiian word for native born or one who has lived here for some time, and some Hawaiians are using Obama’s native son status to turn a profit. The Chicago Tribune (a paper from a city that also claims Obama), writes that this demonstrates “an increasing pull on the future 44th president from those who want to use his native-son status for their own marketing advantage.”

In fact, many shops along Waikiki are stocked with Obama gear—tshirts, key chains and other touristy items that once donned pictures of tropical flowers and had “Hawaii” scrolled across them are now picturing Obama’s face. In fact, some also see the potential to grow Obama tourism in Hawaii, including Obama tour bus stops as part of routes that already go to tourist destinations such as Pearl Harbor and the Polynesian Cultural Center.

There has even been a web site created which is dedicated to showing Obama’s connection with Hawaii and promote tourism through the publicity from the future President. The site showcases the many recreational activities Obama enjoyed when he last vacationed in Hawaii in August. There are photos of him touring the USS Arizona, bodysurfing, gazing across a lush valley from a scenic overlook, playing golf and walking on a beach 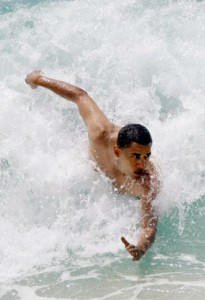 However, Hawaii is not the first place seeking to profit better tourist revenues from the President-elect. The Chicago Convention and Tourism Bureau sponsors “Presidential Chicago,”, which provides visitors with information on Obama hangouts, favorite restaurants and how to get White Sox tickets.

While claiming local ties to presidents has been going on since the beginning of United States’ history, so far using the Obama brand to promote tourism has had limited success.

According to the Chicago Tribune:

“One reason Obama tourism could struggle here is that there are just too many other activities and attractions, including the nearly perfect weather. The many international visitors seem more interested in shopping and dining than Obama history.”

Despite this, a Hawaiian tourism board official has said that Obama’s visit still gives a boost to the state in a time when the economy is keeping more potential visitors at home because reminds people of the destination and also that his steadiness is at least partially shaped by a Hawaiian upbringing that stresses mellowness, peacefulness and acceptance of diverse cultures.

What do you all think of Obama tourism? Would you want to take time during your Hawaiian vacation to see where the President-elect lived, worked and went to school?

>>For those interested in checking out Obama’s Hawaii on their next trip to the islands, check out Go Hawaii’s page dedicated to Obama tourism