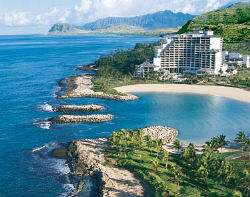 Oahu isn’t the biggest Hawaiian island, but it is the most popular to visit. It’s home to Honolulu, the state’s capital, which probably accounts for the vast majority of those tourists, and it’s also where most of the people who live in Hawaii actually call home as well. The island’s nickname is “The Gathering Place,” and with the big crowds it attracts you’ll find it lives up to that name.

Oahu’s biggest city, Honolulu, is great if you’re looking for some of the best nightlife and shopping the islands have to offer – but it’s also a big city, so you’ve got to prepare yourself for how busy it is. You can base yourself in Honolulu for the convenience and visit other areas on Oahu to get away from the crowds and traffic, or you can get out of the city as quickly as possible and focus your time on the smaller towns and more secluded beaches.

Getting to Honolulu, Oahu

In addition to being the capital, Honolulu is also where you’ll find the islands’ largest international airport – Honolulu International Airport. This is the main entry point for most travelers, although more and more people are opting to fly directly into smaller airports on one of the other islands to avoid Oahu’s crowds. If your best option is to fly to Honolulu but you don’t want to limit yourself to one island, don’t worry – there are lots of inter-island flights each day connecting the different airports.

Some of the points of interest on Oahu are:

>> More on Day Trips from Honolulu
>> More on Beaches in Honolulu

Most of the hotels on Oahu are going to be in around Honolulu, and they’re not going to be cheap. There are some smaller operations, including guest houses and B&Bs, in less busy parts of the island. Possibly the best news for budget travelers to Oahu is that this is the only island with any public transportation to speak of – The Bus is an excellent network of buses which will get you just about anywhere all over the island.

Map of Oahu and Honolulu

Here’s an interactive map of the island of Oahu. You can also turn on the satellite view (top right corner of the map) in order to get an idea of the mountains and terrain or zoom in and out as needed.