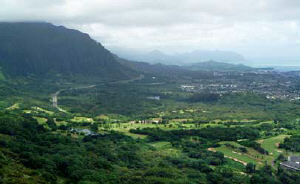 Oahu may be dreadfully overcrowded, especially as compared to some of the other islands in the Hawaiian chain, but there is plenty to see and do here which can make it worth a trip. One of the more spectacular views on the entire island is from the Nu’uanu Pali Lookout on the Pali Highway. It’s the highest point along the highway, and has historic importance as well as just being beautiful.

The Pali lookout is part of the Nuuanu Pali State Park, which is open every day. The lookout point is roughly 1,000 feet up, and it’s incredibly windy up there – so you are well advised to leave anything that might blow off in the car. That means hats of any kind, and any scarves that aren’t firmly tied down. In fact, when you go, keep a tight hold on the kids, or any light-weight members of your family!

Back in the late 1700s, Nu’uanu Pali was the site of an incredibly gruesome battle in Hawaiian history, after which Kamehameha I conquered Oahu. During the battle, Kamehameha’s forces pushed their opponents up the cliff until hundreds fell off the edge to their deaths. The first road through the area was built in the mid-1800s, and the Pali Highway was constructed in the 20th century. There are places where you can see what’s left of the old Pali road.

There are a few superstitions associated with Nuuanu Pali, which you may or may not want to pay attention to. It depends on how superstitious you are! One story holds that you should never carry pork over Nu’uanu Pali, and this is especially true at night. Pork in your car may mean that the car stops working until the pork is removed. There are also ghost stories associated with Nu’uanu Pali, and some drivers use banana leaves or bamboo as talismans against spirit visits.

More Information: There is plenty of free parking (and we’re not kidding about holding onto the young’uns hands up there, it’s seriously windy!).