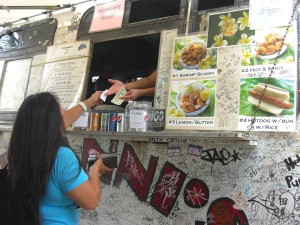 You may not think of shrimp as the first thing that comes to mind with seafood in Hawaii. Many people will think of the wide variety of fish that can be sampled as sushi or sashimi, but there are actually shrimp farms out on the North Shore of Oahu which eventually became a fixture of the around-the-island foodie circuit by setting up shop at the edge of the farms and handing out plate lunches full of delicious shrimp sauteed in garlic, butter, lemon, or hot sauce.

While today much of the shrimp is imported, there are still a few trucks which sell locally raised shrimp. And even the ones who don’t provide an absolutely delicious meal which is considered a “must” for many who are considering a day trip from Honolulu. Recently, two friends and I set out to compare four of the most popular trucks in one day. Here are some notes from our delicious experiment and tips if you’d like to try it yourself.

Some tips for would-be shrimp lovers

– Bring cash with you. Most of these trucks are cash only.
– Bring wet wipes, and take extra napkins. You will get messy, but that’s half the fun!
– Bring gum. Don’t say I didn’t warn you! (Especially if you are getting a scampi plate, which is my favorite!)
– Go early! Hours vary, but the best time to visit the shrimp trucks are just after they open, usually between 10 and 11am, before the mid-day rush hits as tour buses unload for their lunch stops.

Our Comparison of the North Shore’s Most Popular Shrimp Trucks 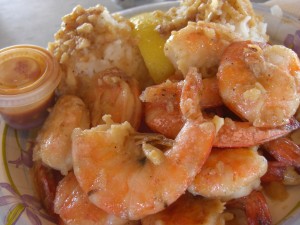 Giovanni’s Original White Shrimp Truck – I remember taking a friend out to Giovanni’s shrimp truck for the first time and he told me that he didn’t really care for shrimp and did I want to split a plate with him? No way, are you crazy? was my knee jerk reaction, which I toned down apologetically moments later. Needless to say, he had to get his own plate. Well, as it turns out, he finished his plate (even before me!) and now loves shrimp. Yes, this is life-changing shrimp.

Giovanni’s is one of the first trucks you will encounter if you are driving out via the Windward side (Kaneohe/Kailua), in the tiny town of Kahuku. This was probably the first truck on the scene, but it can be quite touristy now, and I’ve heard locals bemoan the fact that the shrimp is no longer Kahuku grown. Having tried some of the others, I still believe the flavor of the scampi at Giovanni’s is the best, especially with a slice of lemon and some hot sauce on the side. At $13 (cash only), it’s not cheap, but you do get a dozen shell-on shrimp, where Romy’s up the road gives only 8 for a little over $13, plus charge you for the lemon! There is also a second Giovanni’s truck now in Haleiwa town. 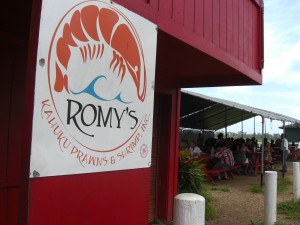 Romy’s Kahuku Shrimp & Prawns Inc. – For years, I’d been loyal to Giovanni’s, but when the topic of shrimp trucks came up in conversation, I realized there is definitely a strong and vocal contingent who praise the freshness of the shrimp at Romy’s. Also, dining there supports local aquaculture as the shrimp and prawns are raised on the farm directly behind the shack. It doesn’t get any fresher than that, and it shows! A friend actually described it to me as being “too fresh” if there is such a thing.

Having tasted the garlic butter plate at Romy’s, I can see what he means. There is no doubt that the shrimp are larger and fresher than those at Giovanni’s. (Which is the reason you get 8 pieces instead of a dozen.) Because of the freshness, you get more SHRIMP flavor at Romy’s vs. the garlic sauce that complement the shrimp at Giovanni’s. I also didn’t care so much for the sauce (a spicy-shoyu combo) and purchased extra vinegar and a slice of lemon to doctor it up. Besides the fresh factor, there are also more choices at Romy’s – steamed sprimp or prawns (with cocktail sauce), kilawen (a sweet young shrimp, served and eaten raw), shrimp wrapped in an egg-roll wrapper and deep fried so they don’t need peeling, and sweet-spicy, which is basically just the sauteed shrimp in sweet chili sauce, a good option if you don’t like garlic. You can also get salad or corn on the cob on the side, and brown rice is an option. 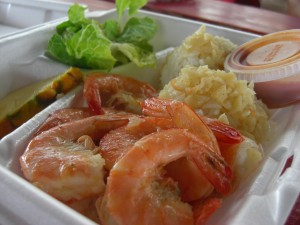 Fumi’s Kahuku Shrimp – Having attempted a day of shrimp truck comparisons, Fumi’s was stop #3 on our adventure. The menu was extensive and although we opted for the “butter garlic” plate to keep the comparison fair, there were numerous items on the list, including some non-shrimp choices like burgers and pork chops, which came highly recommended by some of the regulars. As we were placing our orders the Lost tour van pulled up – apparently Fumi’s was featured in a scene in the hit ABC series when it had been filming on Oahu.

Fumi’s claims to be the only shrimp truck that still harvests their shrimp fresh daily. Although I didn’t see any live shrimp in the tanks previously used to hold them, the shrimp tasted quite fresh. I also really appreciated that the plate came with a light salad with a delicious sesame and papaya seed dressing and a slice of sweet pineapple. It was a refreshing change of pace after the shrimp-rice-garlic combos at both Giovanni’s and Romy’s. Another pro was the price, coming in at $12 for a plate, with no charge for extras like hot sauce on the side. The employees were also extremely friendly and patient, which is quite amazing considering the volume they do! 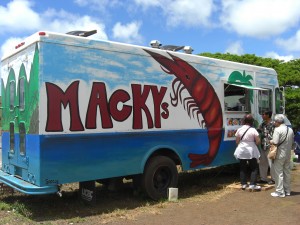 Macky’s Sweet Shrimp Truck – After a quick stop at Ted’s Bakery to check for chocolate-haupia pie, our final stop of the day was all the way out in Haleiwa. If you’re coming straight from town, pull into the first left turn after the Haleiwa sign and you will see Macky’s truck on the right side of the road. The menu was small compared to Fumi’s, but they did have a crunchy coconut shrimp that almost made us deviate from our garlic/butter comparison. (A definite reason to return, after seeing a few of the plates go out!)

Like Fumi’s, the plate at Macky’s included a slice of pineapple and a side green salad, although both seemed to be made with slightly less care than at Fumi’s – the dressing was bottled Italian and the pineapple slightly less sweet. But the real star of the dish was the fresh, tasty shrimp. The delicious garlic flavor was prominent, without overpowering the shrimp, causing one of our tasters declared this her favorite stop of the day. On the downside, the eating area in the middle of the dusty parking lot was probably the least scenic of the four trucks we compared.

For me, Giovanni’s still comes out on top for overall flavor, atmosphere, and quality. Romy’s high prices and the attitude of the employees didn’t sit as well with me, so they’d be on the bottom of my list, although their shrimp and prawns are definitely quite fresh. Romy’s and Macky’s are a toss-up in the middle, as I prefered Fumi’s sides but Macky’s shrimp for flavor.

Which shrimp truck on Oahu’s North Shore is your favorite and why? Feel free to leave your comments below!

>> Check out WhyGo Hawaii on Facebook for our Shrimp Truck Wars album of photos from our day spent comparing shrimp trucks on the North Shore.