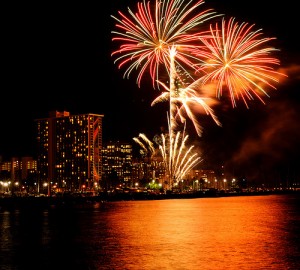 Choosing where to celebrate New Year’s Eve in Hawaii will depend on your personal taste for how much (or how little) you want to do to ring in the new year. You’ll find nightclubs with theme parties, hotels and other venues throwing concerts, restaurants and boat cruises with special menus, fireworks shows that can be enjoyed outdoors (without being bundled up!) and if you’re anywhere near a residential area you’ll probably hear more firecrackers than you’ve heard in your life!

It’s a local tradition for families to string up tons of red firecrackers to set them off at midnight. Just be aware – driving home after that New Year’s Eve party can sometimes feel like driving through a war zone! Fireworks laws have gotten strict, so aerial displays are left to the pros unless you’ve got a permit. Oahu has actually passed a total fireworks ban that is set to go into effect in 2011, but there is always controversy around fireworks laws in the state, so it remains to be seen if this will remain in effect.

Here are a a few of your options for ringing in 2011, broken down by island. Feel free to leave me a comment if you know of another event or fireworks display not mentioned here.

If you’re staying at a resort or hotel, your concierge will also be an invaluable resource about the current options available for New Year’s Eve. Hotels often do not confirm their fireworks displays until just before the holiday, so I’ll try to keep this updated.

Public fireworks displays on Oahu are held at Aloha Tower, Waikiki, and Ko Olina at midnight.

A popular place to watch the Aloha Tower Fireworks is the annual Aloha Tower New Year’s Eve Block Party. You’ll hear music on seven different stages and have the chance to be right on the waterfront for the fireworks at midnight. Presale tickets are $15 for general admission and $50 for VIP. Call (808) 306-3165 for details.

If house/techno music and dancing is more your style, you can head downtown to thirtynine hotel for the interestingly-titled Smell the Glove party. $15 tickets and you should be able to see the Aloha Tower fireworks at midnight. Details here.

For a unique way to ring in 2011, try the Quest for Father Time by Ravenchase. Tickets are $110 and include a Da Vinci Code style treasure hunt along with a VIP after party leading up to midnight. It’s extremely popular and sells out early, so get your tickets by calling (808) 203-8963.

Public Fireworks Displays on Maui – Sheila at GoVisitHawaii.com caught the Maui News article mentioning that there will be public fireworks displays at midnight in Wailea, Hana, and Manele Bay on Lanai.

Maui Restaurants with special New Year’s Eve menus include: The Melting Pot, Nick’s Fishmarket, Pulehu, Sarento’s on the Beach, Son’z Maui at Swan Court and Spago. Reservations for these restaurants can be made through OpenTable.com here.

The Hyatt Regency has a New Year’s Eve Luau with fire knife dancers and a buffet dinner.

Molokini restaurant at the Makena Resort has a three course menu for $62 per person ($84 with wine pairings) from 6-9pm.

Hard Rock Cafe doesn’t have details posted on their website yet for the New Year’s Rock Out party, but it says you can find out prices and packages by calling them at (808) 667-7400.

Local favorite Henry Kapono is scheduled to perform at Duke’s Beach House for New Year’s Eve in Kaanapali. You’ll probably want to call ahead for this one for sure.

The Pacific Whale Foundation offers dinner cruise or cocktail cruise options for New Year’s Eve. Reservations can be made at a discount online. As with all holiday events, these will likely sell out so book early to avoid disappointment.

Maui NYE listings from ClubZone.com can be found here.

Additional recommendations for Maui (including Lanai) can be found from Sheila at GoVisitHawaii.com.

Big Island Restaurants with special New Year’s Eve menus include KPC – Kamuela Provision Company and Imari Japanese Steakhouse at the Hilton Waikoloa Village. You can also make reservations via OpenTable.com or asking your concierge for recommendations.

The Hilton Waikoloa has numerous events for New Year’s Eve and New Year’s day, including the Legends of the Pacific Luau, buffets, entertainment, a ball drop, and special menus. Details here.

Live music by Redd and Lorenzo’s Army at the Blue Dragon to go with your dinner & dancing on the Kohala Coast.

December 26th from 10am to 3pm, take a class on Kadomatsu making and mochi pounding in Holualoa Village at the Donkey Mill Art Center. $25 per family. Details here.

On December 27th from 8am to 2pm at Akiko’s Buddhis B&B in Wailea, you can experience that annual mochi pounding, which is a traditional way to create good luck for the new year. Details here.

Public fireworks displays on Kauai will be at Poipu Beach at 9:30pm (details here).

Kauai Restaurants with special New Year’s Eve menus include Kauai Grill at the St. Regis. Reservations can be made through OpenTable.com here.