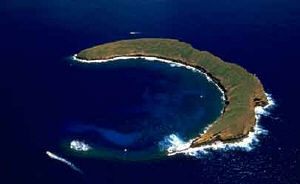 When I first saw the name “Molokini” I assumed it was either a new kind of tiny swimsuit or a fruity but potent cocktail. Thankfully, I was wrong on both counts.

Molokini is a tiny crescent-shaped island off the coast of Maui, and it’s a great spot for snorkeling and diving. Its distinct shape is half of a volcanic crater being above water, although Hawaiian legend holds that the island is part of the body of the goddess Molokini. Regardless of the island’s origins, Molokini is a beautiful spot off the southern coast of Maui. The Molokini volcano underneath the water reportedly last erupted more than 200,000 years ago, so visitors shouldn’t worry too much about it.

The tiny island – an islet, really – of Molokini is a haven for diving and snorkeling, partly because of the abundance of sea life that just naturally exists around Hawaii and partly because the volcano’s crater means that waters in certain parts are only 35 feet deep. This makes it a great spot for beginners, although even experienced divers will appreciate what Molokini has to offer. For instance, there’s an underwater wall that goes down 70 feet, and around the back side of the crater the ocean floor drops down 350 feet. One of the charms of Molokini that makes it such a great spot for checking out what’s going on underwater is that the water around the island is stunningly clear most of the time. 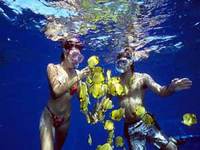 Molokini itself is off-limits to humans, as it’s a bird sanctuary, but divers and snorkelers can spend as much time as they want underwater or in boats just off-shore. It’s illegal to touch or harass the sea life, including the colony of sea turtles which congregates on the island, but watching them from a safe distance is fine – and because most of the animals around Molokini are used to humans you’re likely to be able to see them up close. Test yourself to see how many of the 250+ fish species you can identify!

Location: Molokini is a tiny island about two miles off the coast of Maui

More Information: Tours leave from Lahaina and Ma’alaea Harbor, or the Kihei Boat Ramp; check with the various tour operators for tour prices and options