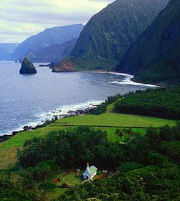 The small island of Molokai might not be on the radar for many who visit the Hawaiian islands, considering it doesn’t have the city lights of Honolulu, the active volcanoes of the Big Island, or Kauai’s Waimea Canyon.

Molokai’s population hovers in the 7,000 range, so you know already that you’re dealing with a quieter island. Put it this way: there isn’t a need for traffic signals here. Despite all that (or maybe because of those things) Molokai is inviting and welcoming to those who do make a point to visit, true to its nickname of “the friendly isle,” so if you’re in the mood for something a little off the beaten path on your next Hawaii vacation, this might just be the perfect fit.

What to do on Molokai

Like the other Hawaiian islands, nature is on beautiful display here – from the Halawa Valley, which you can hike through to end up at the spectacular Mooula Falls; to the Kalaupapa National Historical Park, where you can ride mules along high sea cliffs to take in the breathtaking scenery and also learn about the famous Father Damien. In the late 1800s he began administering treatments to the leprosy sufferers who had been exiled there, and today you can visit his grave as well as the few lepers who chose to remain in the colony.

Molokai’s rugged north shore sea cliffs are, according to the Guinness Book of Records, the highest in the world. If you’ve got vertigo, you might want to strap yourself onto your mule and not look down – let someone else take the photos and you can look at them later from the safety of a lower elevation. Or, if you’d prefer gazing up at the high cliffs, you can also take a boat ride out along the north shore to see the cliffs from below.

One of the best beaches on any Hawaiian island – Papohaku Beach – is also on the western coast of the island. You’ll also find the usual water-sports and activities available here, such as snorkeling, fishing and kayaking, as well as lots of hiking and mountain biking, too. But just because all of those things are available doesn’t mean you have to do them all – remember, this is the island where you can come to slow down and really relax.

Getting Here, Where to Stay & Getting Around

All of this emphasis on nature and peaceful solitude doesn’t mean that Molokai is devoid of resorts or hotels, however. Quite the contrary. While it’s not covered with hotel buildings, there are plenty of smaller condos, vacation rentals, and the Hotel Molokai. Camping is also an option for those who prefer the great outdoors.

There is no public transportation on Molokai, so unless you’re planning on going rogue with your Kalaupapa mule, plan on renting a car. It’s best to book in advance, as there are a limited number of options for rentals, as you might imagine.

Here’s an interactive map of the island of Molokai. You can also turn on the satellite view (top right corner of the map) in order to get an idea of the mountains and terrain or zoom in and out as needed.