Molokai: the “Birthplace of Hula” 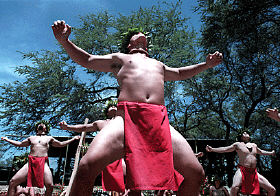 The island of Molokai is commonly known as “The Friendly Isle,” but another nickname could easily be “The Birthplace of Hula.” While not written down as incontrovertible historical fact, Molokai is believed by many to be where hula was born. Legend says that the goddess of hula, Laka, first danced the hula in Kaana on Molokai and from there she traveled to each island teaching the dance with anyone who wanted to learn. Laka is said to have “given birth” to the hula on the sacred hill of Pu’u Nana, and legend holds that Laka is actually buried somewhere in that hill.

Hula was traditionally performed only by men and accompanied primarily by chants, but later hula began to incorporate both genders in the performances and include musical instruments and songs.

To honor Laka’s gift of the hula, and remember where this quintessential Hawaiian dance comes from, there is a festival held each May at Papohaku Beach Park in Kaluakoi called, “Moloka’i Ka Hula Piko,” which means “Molokai, Center of the Dance.” Visitors to the festival get to see some of the best hula performances the islands have to offer, and there’s plenty of food, crafts and other entertainment as well. The Molokai celebration of the hula is not a dance competition, but rather an exhibition of hula performances.

In addition to the entertainment and food, the Molokai hula festival also includes lectures on the historic dance in the days before the festival itself. The lectures are always educational, and always focus on the festival’s chosen theme for that year.

Location: The hula festival is held each year in May at Papohaku Beach Park