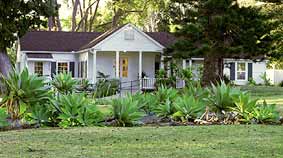 When you think of Hawaiian foods and beverages, you might think automatically of things like pineapple and poi, and probably Kona coffee. But what do you think of when you hear the words “Hawaiian wine?” If you’re raising your eyebrow in curiosity, I don’t blame you. So let me introduce you to one of Hawaii’s wineries, Tedeschi Vineyards on Maui.

Tedeschi is one of only three commercial wineries in all of Hawaii, and the only one on Maui. The winery is located on ‘Ulupalakua Ranch, which covers roughly 20,000 acres. The land was once a sugar plantation, and then a cattle ranch. In fact, much of the acreage remains a cattle ranch even to this day. Tedeschi Vineyards was established in 1974, and the first wines were released three years later.

The main grape which is grown in Hawaii is the Symphony grape, a relatively recent addition to viticulture and a cross between a Muscat grape and a Grenache grape. The wine produced from the Symphony grape is a dry, fruity white wine, but up until 2001 visitors to Hawaii couldn’t buy it. In 2001, a new law was passed which allowed Hawaii’s wineries to begin selling their wines to people who aren’t Hawaii residents.

There is a red wine and two sparkling wines produced at Tedeshi Vineyards, in addition to the winery’s three white wines. The white wines include Maui Blanc, a wine actually made from the juice of Maui pineapples, which is the wine which was first introduced from Tedeschi in 1977. The Maui Splash! wine is the most popular, however, with its light and fruity taste. And even though you can now purchase these wines in shops all over the mainland United States, there’s something about sipping a wine in the tasting room of the vineyard itself, right? Make a stop at Tedeschi Vineyards a part of your Maui trip.

Location: The address is HC 1, Box 953, Kula, HI 96790 – but consult the driving directions here if you’re looking for additional help.