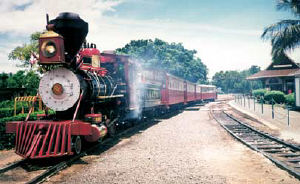 There’s something about riding on a train that makes people smile – and you don’t have to be a train fanatic to get excited about riding an historic train, either. On Maui you can get from Lahaina to Ka’anapali by train, and even saying the name is fun – all aboard the Sugar Cane Train!

Maui’s Sugar Cane Train, also known as the Lahaina, Kaanapali & Pacific Railroad (but that’s no fun to say!), is one of the few trains left in Hawaii and offers passengers panoramic views of Maui along the half-hour journey. The train gets its nickname from the fact that sugar was once transported from the fields to the mills via steam trains on these same tracks. The steam locomotive that pulls the Sugar Cane Train is a reconstructed 1890 engine.

In addition to the great views from the train cars, guests on the Sugar Cane Train are treated to Hawaiian-style entertainment in the form of a conductor who sings in between indicating points of interest along the way. From roughly December through April, during whale watching season, it’s not unheard of to even see humpback whales. You can get on the train at either end of the tracks, in Lahaina or Ka’anapali, to begin the round-trip journey.

There used to be a dinner train service offered, but it was discontinued as of January 1, 2008. In its place, the train and the depot can be booked for private events, including dinners.

Location: You can board in either Lahaina or Ka’anapali for a round-trip journey

Here’s a great video from a train enthusiast!