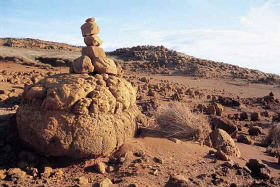 Lanai is pretty remote, and not as many tourists come here – but even this tiny island has lots to offer the people who do visit. With only one town to speak of, this is an island that’s devoted to nature and to truly getting away from it all. Of course, if you’d still like to be within spitting distance of a couple of nice golf courses and luxurious resorts, that can be arranged as well.

Where to Stay on Lanai

Once home to a pineapple plantation that sprawled over the whole island, Lanai is now home to roughly 3,000 residents and a burgeoning tourism industry. There are two top-notch resort hotels on the island, each with its own fabulous golf course. The Four Seasons Lodge at Koele is located upcountry, providing a cooler temperature and activities like horseback riding and archery. The Four Seasons Manele Bay is oceanside, with a gorgeous view of the bay. These are the most common places for tourists to stay, as the smaller Hotel Lanai in Lanai City and might not necessarily be near the things you’ll want to see, so it is mainly used by people visiting island residents or those looking for less of a “resort” experience.

Things to Do on Lanai

If you thought Hawaii was all lush greenery and beaches, you’d be wrong. Some of the landscapes on Lanai will make you think you’re no longer on earth, including what’s known as the “Garden of the Gods” or Keahiakawelo, pictured above. Don’t let the word “garden” fool you, though, this is a garden of rocks. The redness of the dirt and rocks here echoes the redness of Mars, and the rock formations are in towers throughout the area. There’s also an area on the island where you can see petroglyphs that date back more than 500 years – the Luahiwa Petroglyphs are well-preserved because of their protected location, and offer a look back into the 15th century.

Of course, you will still find glorious beaches here, too, including those of the protected Hulopoe Bay where you can enjoy great snorkeling and swimming and maybe – just maybe – catch a glimpse of a Spinner dolphin or Humpback whale. With 40 miles of coastline, you’re sure to find a beach that suits you perfectly, and you may just have it all to yourself.

>> More about Beaches in Hawaii

Getting Here & Getting Around on Lanai

Not only is much of Lanai rural, most of the sights and attractions which you’ll want to enjoy – including the Garden of the Gods and the Luahiwa Petroglyphs – are only accessible via dirt roads or even no roads, making not just a rental car but the use of a four-wheel drive vehicle mandatory.

Here’s an interactive map of the island of Lanai. You can also turn on the satellite view (top right corner of the map) in order to get an idea of the mountains and terrain or zoom in and out as needed.