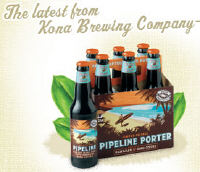 When most people think of Kona, they think of scenic shorelines, the bubbling lava flows of the active volcanoes in nearby Volcanoes National Park, beautiful sunsets and the rich, aromatic and very expensive coffee beans grown in the area. Few people think of beer, however. That is until recently. Brewing amidst the tourists, beautiful sunsets and the Ironman Triathletes, father and son Cameron Healy and Spoon Khalsa have established a uniquely Hawaiian microbrewery.

History of the Kona Brewing Company

Healy and Khalsa are originally from Oregon, where they watched a microbrewery movement spring into existence and grow at a break-neck pace. So, in 1994 in an effort to bring the passion for fresh, locally made beer present in the Pacific Northwest to Hawaii, the father and son crossed the ocean and decided to combine two of their loves—good beer and the Big Island—into one dream. They established the Kona Brewing Company nestled along the very shoreline Captain Cook first spotted the Hawaiian Islands and where King Kamehameha the Great once united and ruled the archipelago.

The Kona Brewing Co. began making waves with the introduction of its Pacific Golden Ale (now called Big Wave Pale Ale) and its Fire Rock Pale Ale in February 1995. Since then, the brewery has grown at a remarkable pace, growing at a rate of 297 percent every year. The brewery now produces 190,000 gallons of beer each year and exports its beers throughout the Hawaiian Islands and to limited markets in the U.S., Japan and China. In fact, the brewery is now the largest microbrewery in Hawaii and was named the tenth fastest growing brewery in the nation in 2005. Kona Brewery Co. continues to expand distribution of its beers through a strategic alliance with Widmer Brothers. They hope to bring their popular Hawaiian beers to markets across the entire U.S. and the rest of their world.

Where to find Kona Brewubs

In 1998, Healy and Khalsa also began serving up pizzas, salads and pub fare at the first Kona Brewery Co. pub on the Big Island. After success of the initial pub, the brewery opened a second restaurant in 2003 located on the docks of scenic Koko Marina in East Oahu. The Oahu location boasts a selection of 24 different taps and also serves up a variety of fresh fish entrees.

So whether vacationing among the palm trees, hitting up the surf or trekking across the lava flows, stop in, take a break, and enjoy a Hawaiian microbrew at the Kona Brewing Company.