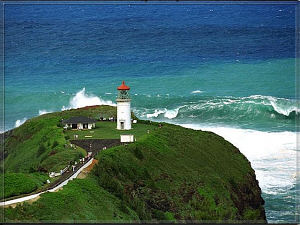 If you’ve already visited the southernmost point in the U.S. on the Big Island, then perhaps you might want to hop over to Kauai and visit that island’s northernmost point. Okay, so it’s not quite as dramatic-sounding, but it’s a heck of a lot prettier.

The Kilauea Lighthouse sits on a piece of lava rock that juts out into the ocean at the most northern point of Hawaii’s main islands, and it has stood there since 1913. The land it stands on was originally purchased from the Kilauea Sugar Plantation Company in 1909, but it was so remote and difficult to access that it took quite awhile for them to figure out a reasonable way to transport construction materials and personnel to the site. In the end, the method they settled on was to transport everything by sea.

While in 1913 the Kilauea Lighthouse’s revolving lens was the largest of its kind, the light was turned off in the 1970s and replaced with a more modern light beacon, which requires very little maintenance. This historic landmark guided ships passing to and from Asia for more than 60 years with that massive lens, which remains in the original light house, and is now open to visitors.

The land around the Kilauea Lighthouse became part of the Kilauea Point National Wildlife Refuge in 1985, so heading out for a visit is kind of like a two-fer, especially if you’re into bird watching.

Location: State Hwy 56 and Lighthouse Rd., Kilauea, Kauai, HI 96754
To get there – Turn off the Kuhio Highway at the entrance to the town of Kilauea and follow the signs to Kilauea Lighthouse.

Admission: $3 per person for everyone over the age of 16