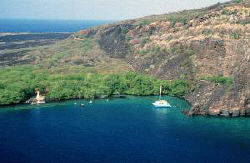 Surfing in Hawaii may not be something you want to try, especially if you’re not already an expert surfer when you go, but snorkeling in Hawaii is something nearly everyone can do easily and quickly. Every island has great snorkeling spots, but one of the best (and most popular) in the entire island chain is Kealakekua Bay on the Big Island.

Kealakekua Bay is on the Kona coast of the Big Island and it’s now a marine conservation area, making it ideal for checking out the varied marine life that congregates there. In addition to the copious amounts of fish and relatively stationary sea life in the bay, it’s also a place where dolphins tend to gather, which is a real treat for visitors.

Besides being a popular destination for snorkeling and diving, Kealakekua Bay is also historically important to Hawaii. It is at this point that Captain James Cook first landed on the island in 1779. He arrived during a religious festival and was thought to be a god, but later when his ship returned after a storm there was an argument between Cook’s crew and the local Hawaiians. The argument quickly escalated into a fight during which Cook was stabbed to death. The point of his death was almost exactly where he had first arrived on the island about a month prior, and there is now a monument to Captain Cook in Kealakekua Bay.

Because Kealakekua Bay is a protected area, it is accessible mainly via chartering a boat or booking a spot on an organized tour. While this may cramp your spontaneous style a bit, these packages are great because you usually get fed well as part of the trip, and the tour leaders know the best places to look for the creatures underwater. Anyone who is new to snorkeling will also appreciate the instructions and the element of safety that being on a guided cruise gives you. There are several companies which offer daily snorkeling cruises in Kealakekua Bay, sometimes twice each day.

Location: Kealakekua Bay is part of the Kealakekua Bay State Historical Park, on the Kona coast of the Big Island, roughly 12 miles south of Kailua-Kona; take Napoopoo Road or Puuhonoa Road from the Mamaloahoa Highway.