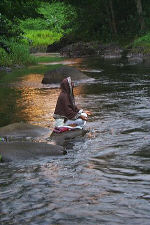 If you think that after sunning yourself on Hawaii’s fantastic beaches, learning to surf and hiking through the famous volcanoes that you’ll be bored in Hawaii, you’re wrong. But if you think you’ve just got to start over with the beaches and do it all over again to keep yourself busy, you’re also wrong – there are hidden gems in Hawaii, you just have to be willing to step outside the usual itinerary to find them. One of those hidden gems is the Hindu monastery on Kauai, called Kauai Aadheenam.

The Hindu monastery and temple complex on Kauai covers nearly 460 acres and includes a theological seminary, publishing center, a sacred forest, and two temples. The Iraivan Siva temple is currently under construction, which it has been essentially since 2001. The first Siva temple built on Kauai is the Kadavul Hindu Temple, which was constructed in 1973, and it serves as the primary temple for the monks who live in the monastery. When the Iraivan Siva temple is complete, the current round-the-clock vigils which have been held at Kadavul since it was first built will likely be moved to the Iraivan temple. Kadavul contains some of the most important pieces of religious artwork in the Kauai monastery.

Kauai’s Hindu monastery is the home of the Saiva Siddhanta Church, founded in 1949, although the monastery itself was founded in 1970. And although the residents monks practice ancient Hindu traditions, they are also fully engaged in the high-tech world that surrounds them – the monastery’s website is up-to-date and the monks run a publishing company from the monastery which produces Hindu publications. Pilgrims are welcome year-round at the Kauai Hindu monastery, though the recommended best times to visit are during February-March, July, or October-November because of the special worship and meditation possibilities.

Visitors who aren’t pilgrims are also welcome at the Hindu monastery – there are guided tours of the temples and gardens offered every week or so. For a current list of tour dates, you can check at the monastery’s entrance or check the tours page. Visitors are asked to dress appropriately – no exposed legs or shoulders – and to bring umbrellas in case of unexpected weather changes.