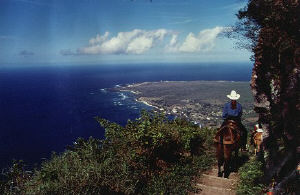 Okay, so when you’re planning a tropical getaway, visiting a leper colony probably isn’t high on your list of things to do. But if you haven’t stopped reading by now, allow me to tell you why you should consider a trip to the Kalaupapa National Historical Park on Molokai.

For just over 100 years during the 19th and 20th centuries, people in Hawaii who had leprosy were forced to live in isolation in a small and remote part of Molokai. This was, of course, largely done out of fear – non-afflicted residents didn’t want to get the disease, so they sent the sick away. Not long after the first lepers were sent to the Kalaupapa peninsula on Molokai, Father Damien began ministering to the sick, both in terms of religion and medicine.

Father Damien, whose real name was Joseph de Veuster, came from Belgium and began his work on Molokai in 1873. He built a church in the colony, and oversaw the farmwork, the construction of schools and the basic rules of the community. He was fully aware that working so closely with the lepers was very likely a death sentence for him, and indeed he died of leprosy in 1889 at the age of 49.

While his time in the leper colony may have been limited, it was Father Damien’s work that helped raise the issue of leprosy in the eyes of the outside world. Large amounts of money were raised by people all over the world, and gifts of food, medicine and clothing were sent to the colony during Damien’s life and after he died. Father Damien was beatified in 1995, and remains a local hero in Molokai. He was originally buried in the leper colony, but the Belgian government later asked for the return of his body.

Today, visitors can pay tribute to Father Damien at Kalaupapa National Historical Park. The park was created in 1980 to preserve the island’s two leper colonies and serve as a reminder of what happens when we isolate those in need. There are still many leprosy patients who live in the area, but it is safe to visit and many tourists do each year. All visitors must obtain a permit from the Hawaii State Department of Health to get into the Kalaupapa Settlement, which is where the remaining lepers still live, but organized tour companies will arrange this permit for you. There are no children under the age of 16 allowed in the settlement, however.

In addition to the historic reasons to visit Kalaupapa National Historical Park, there are also mule rides which take you along high sea cliffs and offer fantastic views. See? It’s not all about expanding your mind and heart, it’s about expansive sights as well.

Hours: The park itself is open 365 days a year, but there are limited visiting times out of respect for the residents. Organized tours run Monday through Saturday, although there are no tours on Thanksgiving Day, Christmas Day and New Years Day.

Admission: The park itself is free to enter, but organized tours each cost a fee.