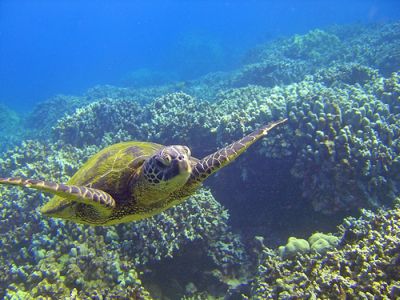 Unlike many other travel destinations around the world, a trip to Hawaii is rarely affected much by the season or month of the year. Yes, there is a bigger North Shore swell and whale watching in the winter months, and some months do see more rain than others—but in general, travelers coming to the islands are almost guaranteed to find a whole lot of warm sunshine pretty much year round. That being said, different months in Hawaii offer slightly different opportunities for activities.

Summer kicks off in May in Hawaii and the summer months tend to bring calmer seas, which means better swimming and snorkeling conditions. It also means if you are prone to sea sickness, than you are probably better off taking a catamaran tour of the Na Pali Coast (or other boat tour) in July than in, say January. Summmer on the south shores of the islands are the opposite – so if you’re looking to try out surfing during summer months, the largest waves will be on the south side.

What to do in Hawaii in July

Again, because the weather in Hawaii is little affected by the time of the year (translation: it’s pretty much always 80 and sunny here whether it be July or December), the season will affect what kinds of activities that you are able to do. Hawaii basically experiences two seasons, Winter and Summer.

Summer in Hawaii brings calmer seas, better snorkeling, diving, and swimming, while winter brings a bigger swell for those wanting to surf in Hawaii and great whale watching opportunities. The drier, slightly warmer summer season usually kicks off in May in Hawaii and by July summer is in full swing—meaning you’re likely to have less rain and calmer seas by this time.

Still want to know more about what to do during your vacation to Hawaii in July? Check out these posts:

Holidays, Festivals and Events in Hawaii in July 2011

7/4 – Makawao 4th of July Parade & Rodeo —Although you are more likely to think of Wyoming than Hawaii when you hear the world “rodeo,” Hawaii actually has a strong tie to cowboys and ranching culture. This is evident when over 4th of July weekend the largest rodeo in the islands takes place at the Kaanaolo Ranch on Maui, where more than 350 cowboys from all over the world come to take place in the Hawaiian style rodeo, complete with rough stock and roping events and rodeo clowns. Before and after the rodeo, enjoy live entertainment and country western dancing. Details here. (Maui)

>> For a list of events throughout the islands, please check out ways to Celebrate 4th of July in Hawaii. 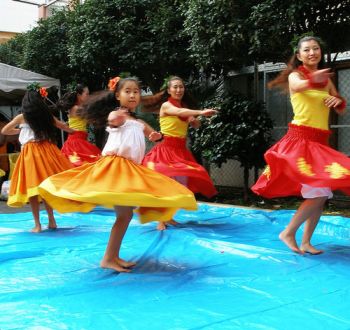 7/15 – 7/17 – Bayfest 2011 – Bayfest is a yearly event held at the Kaneohe Marine Core Base which features a fireworks display to kick off the weekend, food booths, an E.K. Fernandez midway of rides and games, and concerts by some major local and national groups. Headliners this year include Puddle of Mudd, Joe Nichols, Cecelio & Kapono, and Hoobastank. Details here. (Oahu)

7/16 & 7/17 – Hale’iwa Arts Festival—If you find yourself on the North Shore of Oahu in the third week of July, make sure you stop by this arts festival, which a non-profit event that features over 130 Juried Visual Artists from Oahu, the Neighbor Islands and several mainland and international locations. There are also performances that include traditional Hawaiian musicians, singers, dancers and storytellers. There are also cultural history triolley tours, student art displays and children’s art activities. Details here. (Oahu)

7/17 – Ukulele Festival in Hawaii—Held annually in July at Kapiolani Park Bandstand in Waikiki, the Ukulele Festival attracts thousands of residents and visitors to a free two-hour concert that showcases many of the finest ukulele players in the world, along with Hawaii’s top entertainers, national celebrities, and an ukulele orchestra of more than 800 children. Details here. (Oahu)

7/22 – 7/24 – Hawaii Ocean Film Festival – Get a chance to watch films from around the world about ocean recreation and marine resources on the big screen in Hanalei, Kauai. Details here. (Kauai)

7/30 – Palaka Party Hawaii 2011 – This fundraiser for the Kona Historical Society will honor Edward Kaneko and Tomoe Nimori for their lifelong community service. Held in Kealekekua Bay, the gala will include entertainment, food, and an extensive silent auction. Details here. (Big Island)

Ongoing through the summer – Honolulu Zoo’s “Wildest Show in Town” Summer Concert Series – These family friendly concerts run each Wednesday night through the summer and feature some of the best in local entertainers for only $3 admission. Details here. (Oahu)

Weather in Hawaii in July

The great part about booking a vacation to Hawaii is that you will rarely have to worry about what the weather will do on your trip, whether you decide to go in July or February.

Summer temperatures in Hawaii (May through mid-October) are in the 80s and night times from the low 70s to the low 80s. Consistent trade winds keep summer temperatures tolerable. Konas can blow in from the south or west and bring humid, sticky, or sweltering weather and thunderstorms. Showers are short.

The other advantage of coming to Hawaii in July is that the days are longer and you can enjoy more hours on sunlight in the islands.

Getting to Hawaii in July

While July does fall into the high-season in Hawaii, it is not the most expensive time to travel to the islands (Christmas and Spring Break are usually more pricey). While you won’t find the same deals in July as you might in March or October, you shouldn’t have too much trouble getting a good deal on flights to Hawaii. There are also always plenty of great deals to Hawaii.

Where to Stay in Hawaii in July

It can be more difficult to find an affordable hotel in Hawaii in July than at other times of the year, as peak travel season to the islands has arrived. However, whether you are looking for a high-end resort, mid-range hotel in Hawaii or even a hostel in Hawaii, you shouldn’t have problems finding something within your budget in July. (Though beach camping in Hawaii is always another option).