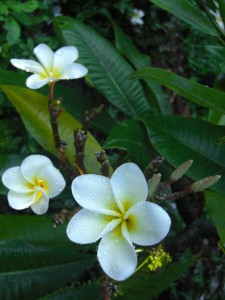 After the haze clears from the New Year’s Eve fireworks, people in Hawaii take a deep breath and get ready for the year ahead. Whale watching season peaks in January, major sporting events put Hawaii in the national spotlight, and let’s face it – even though it’s our “rainy season,” winter in Hawaii is probably a whole lot warmer than wherever you’re coming from!

Winter is the time for big surf on the North Shore and glassy conditions for snorkeling or diving on the South side. If you’re visiting the Big Island, January is Volcano Awareness Month – the perfect time to get up close and personal with Hawaii’s active volcanoes. If you’re visiting Honolulu, you’ll also find Chinese New Year events throughout the month. The list below is just a small sampling of events taking place around the islands in January 2010.

1/1 – Fukubukuro – In a tradition borrowed from Japan, shopping centers in Hawaii such as Ala Moana Center and the Royal Hawaiian Shopping Center are featuring “lucky bags” on January 1st, where shoppers have a chance to purchase special grab bags from their favorite merchants. The contents are not revealed until after you buy, but you will be getting 50% off a selection of goods from participating merchants. (Statewide, but primarily Waikiki/Oahu)

1/13 – Hawaiian Music Series – Enjoy free Hawaiian music performed live on the lawn of the Baldwin House Museum in Lahaina, presented on the second Thursday of each month from 11 am to 12:30pm. (Maui)

1/18 – 1/23 – PGA Champions Golf Tour – The best of the best attend this invite-only PGA event at the Jack Nicklaus designed course at the Four Seasons Hualalai. The event’s official website can be found here. (Big Island)

1/29 – Rotary Club of Po‘ipu Beach’s Annual Winetasting Extravaganza – The event will be held at 5:30 p.m., at the Kilohana Luau Pavilion in Lihu‘e. The event features a large selection of fine wines, live entertainment from several local musicians, a silent auction and more. Details can be found here. (Kauai)

1/30 – NFL Pro Bowl – After moving to Miami for a year, the NFL Pro Bowl returns “home” to Aloha Stadium. The official website can be found here. (Oahu)

Kapa’a and Waimea Walking Tours – Every Tuesday, Thursday, and Saturday you can get a glimpse into the history of Kapa’a or Waimea on Kauai. (Kauai)

>>It’s also still football season (not just in Hawaii of course!) so if you find yourself in Waikiki looking for a place to watch the game, check out our list of 5 Places to Watch Football in Waikiki.

Ongoing through the month of January

Chinese New Year – The Year of the Rabbit begins in the Chinese calendar on February 3, 2011. For a listing of events and activities ongoing throughout the month of January, see Chinese New Year in Honolulu’s Chinatown. (Oahu)

Whale Watching – (Statewide) You can find whale watch cruises on all the islands during the month of January as the humpback whales make their annual migration to warmer waters. Hawaii law requires boats to stay a safe distance from these enormous creatures, but it’s not uncommon for them to be seen breaching out in the open ocean. Sometimes you can even spot the whales from shore, so keep your eyes peeled!

Side note on whale watching: I’ve noticed a few whale watch cruises being featured on Groupon and some of the other group buying sites. PlayHawaii has also just expanded to include the outer islands, so visit my article for more info on how to take advantage of these to save some extra money on your vacation!