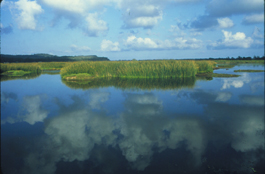 The James Campbell NWR seeks to preserve the wetlands that still exist on the northern part of the O’ahu Island, Hawaii. Established in 1976, it has provided the protection, food, and nesting sites to the endangered water birds of Hawaii, as well as close to 114 other species of water bird.

The wetlands are maintained so that they may provide protection to the endangered Hawaiian stilt, coot, duck, and moorhen. This refuge gives them their best chance at survival, and doubles as a stop for many migrating birds. There is currently an attempt to expand the refuge to from its 260 acres of freshwater wetlands to 1,100 acres, which would make it the largest wetland wildlife refuge that is managed in Hawaii.

What To Expect
There are two parts of the wildlife refuge: the Punamanō Unit (134 acres) has a natural marsh that offers deep waters for wetland birds and the Ki‘i Unit (126 acres), unlike the Punamanō, is an artificial system of wetland habitat created for the wetland birds. Recreation at the Refuge consists mainly of observation and photography, so that the natural habitat for the water birds is uninterrupted during the breeding season.

Hours of Operation
The Ki‘i Unit is open during the non-breeding season on a limited basis. Open third Saturday in October through the third Saturday in February, the refuge is not open the rest of the year because of the ae‘o breeding season. Guided public tours are available on Thursday afternoons and during the morning of the first two Saturdays of the month, and in the afternoons of the last two Saturdays of the month. You must reserve a space to take the tour.

Admission Cost
The public is not allowed entry into the refuge unless participating in the guided public tours, or the visit is authorized by the refuge manager.

How To Get There
Contact Mike Silbernagle, Acting Project Leader, by phone at (808) 637-6330, or by email at: michael_silbernagle@fws.gov to set up a tour reservation and receive directions.