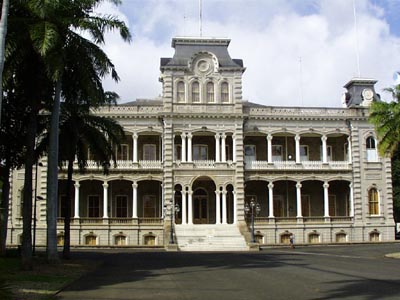 The only official royal residence in the United States is not located in any of the continental states, but across the Pacific on the island of Oahu. Iolani Palace in Honolulu was the official residence of only the last two Hawaiian monarchs—King Kalakau (who built the palace in 1882) and his sister, successor and last ruling monarch of Hawaii, Queen Lili’uokalani. During the rule of these last two monarchs, Iolani Palace was at the center of social and political activity on the islands. After decades of neglect, however, the palace was in bad shape until restoration began in the 1970s and has continued until today.

As a National Historic Landmark, efforts have also been made to recollect many of the art pieces and furniture that originally decorated the palace. Most of these items were sold off and stolen after the fall of Queen Lili’uokalani at the turn of the twentieth century. Today the palace is a popular tourist destination and location for wedding receptions and other private events. The palace also provides a beautiful and dramatic backdrop for the free concerts by the National Hawaiian Band on palace grounds most Fridays. These concerts are held on Fridays from 12:00-1:00 p.m. and are a great (and free!) way to participate in the bands long tradition of sharing Hawaiian music with the world.

Iolani Palace is open for both individual and group tours Tuesday-Sunday with ranging hours. The palace is closed Sunday and Monday.