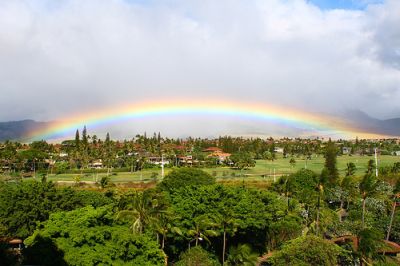 Unless you’ve been living in some sort of fallout shelter awaiting the apocalypse (which I’m pretty sure is upon us after seeing photos of Sydney covered in a thick red haze), you are very much aware that we are in the midst of a pretty bad global recession right now. Stock markets crashed, big banks and car manufacturers took giant government bailouts, the unemployment rate is high, people lost retirement funds and their homes and everyone is trying to convince themselves that “staycations” are not lame when opting out of their annual travel plans.

Hard hit by the economy means good deals for the consumer

All of this economic distress has been especially hard on travel. This is even more so the case for certain destinations—namely Hawaii and Las Vegas—that were typically seen as “luxury” vacation destinations, easily nixed when American collectively tightened their belts.

In fact, MSNBC recently reported that hotels in Hawaii posted a sixth straight month of record low occupancy in July of this year, despite so many amazing deals out there that intended to draw increasing numbers of travelers.

As a result of low occupancy rates and fewer people vacationing in the isles this year, rates at hotels have significantly dropped, and cheap flights to Hawaii (especially from the West Coast) are not only easy to find, but can also cost as little as $300-$400 round-trip.

While I learned last year in an interview with Keoni Wagner of Hawaiian Airlines, that fall is almost always a good time to score deals on Hawaii (and there have, in fact, been many fabulous fall and winter travel deals to Hawaii and some great fall specials in Hawaii), this year it seems that these deals are lasting well into the usually busier and more expensive winter and holiday travel season.

Because occupancy at Hawaii hotels is way down, many of the islands hotels and resorts have been rolling out crazy offers and promotions in an effort to lure more travelers to the islands. With free nights, resort credits and big discounts on rooms, now is the time to find some screaming good deals at cheap Honolulu hotels and resorts scattered around the islands.

If you find yourself on the Big Island, Hawaii magazine is reporting that the newly-renovated Mauna Kea Beach Hotel is now offering a $500 resort credit. Yes, you read that right, 500 big ones. The “Legacy 500” promotion is rewarding guests with $500 in resort credit for every 3 nights spent at the hotel. The credit can be used for the resorts full service spa, rounds of golf and dining on all property restaurants. This means you are essentially getting an all-inclusive deal for the price of your room.

Hotels in Maui, which have fared better than hotels on some of the other islands, have also not been immune from the economic woes of the travel industry in the state. The Maui Prince Hotel closed after 23 years in business at the end of the month, but will be re-opened as the Makena Beach and Golf Resort.

While the Maui landmark with a new name has not yet opened, look out for great deals at the newly named hotel in the near future.
Whether you have traveled to Hawaii before, or have been waiting for the right opportunity to visiting the tropical islands, now just may be the time to take advantage of all the great deals. While analysts don’t expect hotels to rebound until well into 2010 and travel analyst Christopher Elliott thinks 2010 is the year of the travel deal, I’d rather book my cheap Hawaii vacation now than wait for prices to go back up.

photo by Randy son of Robert