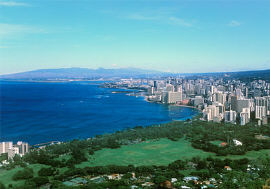 There are a million reasons why it’s great to travel to Honolulu, but here’s another reason – it’s one of the world’s cleanest cities.

According to Forbes, Honolulu ranks 2nd on the list of the cleanest cities in the world, behind Calgary in Canada. Putting that list together with the contrasting list of the world’s most polluted places shows the stark reality of the divide over pollution, as countries in the developing world pollute on a much greater scale than those in the developed world. Of course, the cleanest cities are also disproportionately in the wealthiest countries, too.

In the Forbes article, Honolulu is described this way:

Honolulu is a tourist center and has light manufacturing. It has an excellent public transit system with dedicated bus right of ways that has been singled out for praise by the American Public Transportation Association.

So there you are – just one more reason to visit Honolulu! And when you do, make use of that excellent bus system so that you’re not adding to the problem with the carbon emissions from your car.

For more information about the world’s cleanest and most polluted places, see this article.