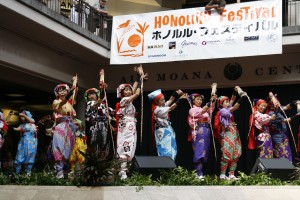 If you’ve spent any time in Waikiki, you’ll definitely notice the large presence of Japanese visitors who vacation here in Hawaii. It’s sometimes easy to forget that much of the permanent population here is also ethnically Japanese. Immigrants from Japan came to Hawaii to work on the sugar populations and in many cases – like my great great grandparents – they never left.

The same story goes for many other cultures around the Pacific Rim – South Korea, China, Taiwan, Australia, New Zealand, Phillipines and more. The result is a wonderful blending of cultures that truly makes Hawaii unique. The Honolulu Festival is an annual celebration of the diversity that exists in Hawaii, showcasing the rainbow of music, dance, food, and culture that comes from around the Pacific Rim, including our Hawaiian Islands.

This year’s festival will be held over the weekend of March 11-13th and includes art and cultural performances at five venues around Waikiki – the Hawaii Convention Center, Ala Moana Shopping Center, Waikiki Beachwalk, Waikiki Shopping Plaza, and DFS Galleria. New this year is a traditional Japanese Bon Dance at the convention center. Sunday evening’s highlight will be a grand parade through Waikiki via Kalakaua Avenue, complete with the fire-breathing dragon, Daijayama. 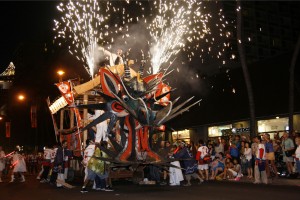 Exhibits at the Hawaii Convention Center include a craft fair, an Ennichi corner for children, and a feature of Japanese Anime. Competitions of Hawaii chorus, band, cheerleading and dance troupes will also be held throughout the day on Saturday.

The theme for the 2011 festival is “we are all neighbors, around the world” and is very fitting, in light of the devastation from the March 11th tsunami that hit Japan and to a lesser extent, Hawaii. A new fireworks display from Nagaoka city in Japan has been canceled out of respect for the victims.

All events are free and open to the public, with the exception of the Friendship Gala at the Hawaii Convention Center on Saturday evening. Top restaurants from around Honolulu will be featured at the gala, which will raise funds for the Honolulu Festival Foundation’s educational efforts “to perpetuate the culture, customs and traditions of Asians and Pacific Islanders through community outreach and charitable efforts.” Tickets and further details are available here.

>> Check out other events happening in March in Hawaii.