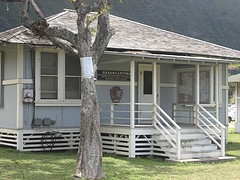 Kalaupapa National Historical Park located in Kalaupapa, Hawaii is a monument to the people who were forced to leave their homes and relocate to the far regions of Molokai Island because they were afflicted with Hansen’s disease, also known as leprosy. The first group of victims arrived in January of 1866, followed by other groups throughout the end of the 1800’s. Looked at as Hawaii’s last hope to prevent the epidemic from destroying the Hawaiin population, Hawaiin King Kamehameha the fifth signed the law that ordered those afflicted with leprosy be moved into isolation at remote Kalaupapa peninsula.

The isolation brought the world’s attention to the disease. In 1872, the Catholic Church established St. Philomena, dedicated to the patients suffering there. Father Damien administered there until his death, which helped raise the awareness of Hansen’s disease causing England to start a society dedicated to the cause and cure of leprosy.

Today there are twelve cemeteries at Kalaupapa, representing the various faiths present. Many survivors of Hansen’s disease still live in Kalaupapa, making it a thriving community and education center for treatment of Hansen’s disease. Visitors are required to arrange a tour unless they are visiting a resident of the town.

How to get there:
Permission from the Hawaii Department of Health is required to visit. Once permission is granted, directions will be given on how to get to the park either via air or by the Pali trail. Damien tours may also be contacted to arrange to visit the park, as they will help arrange permits for their guests.

What to expect:
Kalaupapa National Historical Park is located on the tip of Molokai Island. It is advisable to ask the tour company what visitors should or should not bring with them into the park.

Average costs:
Entrance to the park is free. Children under the age of 16 are not allowed to visit. Tours must be arranged through a resident or through a commercial tour group.

Hours of operation
The Park is open year round. Permission to visit is required.