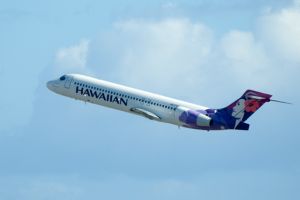 Last week, I sat down with Vice President of Public Affairs at Hawaiian Airlines, Keoni Wagner, and he told me all about his airline’s hottest deals and new service from Honolulu to Manila. Now, while Wagner was definitely there to push his own agenda, I have to admit he had some good points. Here are some of the major bonuses about the new route offered by Hawaiian Airlines to Asia.

It’s true that flying to Asia from the United States means an awfully long plane ride, particularly for those coming from the East Coast. If you are headed to the East (by way of the west), a great way to break up the long flight is with a stop-over in Hawaii. Not only will you have the advantage of two shorter flights, spending a few days in the Hawaiian islands is hardly rough. In my opinion, it could also be a great excuse to spend a little time in Hawaii. I mean, really, there are worse things. Stretch out those legs and enjoy some time soaking up those Hawaiian rays before continuing on your journey to Asia.

Manila is also a great gateway location in Asia. Located only an hour and half from many other major Asian destinations, such as Hong Kong, launching your Asian vacation from this Filipino city is fairly easy.

Hawaiian Airlines launched their new non-stop service from Honolulu to Manila, Philippines last April. The ten-hour flight, which will leave from Honolulu every day of the week, will take passengers to Manila in a wide-bodied Boeing 767 aircraft. And, in a day and age where airlines seem to be making you pay $5 for a bag of peanuts, I thought it was great to hear that Hawaiian Airlines serves complimentary hot meals in Coach and offers its First Class passengers a unique tasting menu. I haven’t tried these meals for myself, but according to Keoni Wagner, they actually don’t taste too bad. I mean, it’s still going to be airplane food, but as long as its edible, I’m happy. I mean 10 hours without food is just too long and I appreciate they don’t charge extra for it. Hawaiian Airlines has a reputation for striving to start their passengers’ vacation as soon you board the plane, and the menu with a Filipino flair is their effort to achieve that.

Monday, Tuesday, Thursday, Saturday: Departs at 7:00 pm and arrives in Honolulu at 11:15 am the same day.

>>For more information or to book your flight, visit Hawaiian Airlines web site