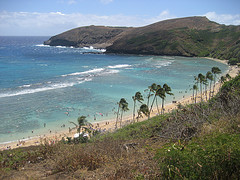 How to Get There
Hanauma Bay Nature Preserve is located on Kalaniana ‘Ole Highway, Route 72. It is roughly ten miles east of Waikiki.

How Much it Cost
The charge to park is $1 per car.
The admission price is $5 per person. However, children under 13, residents of Hawaii, and active duty military personnel assigned to Hawaii receive free admission.

What to Expect
Since this is one of the most popular beaches in Hawaii, there will be people. It is a good idea to arrive early because there is a limit to the number of visitors allowed each day. To protect the beach and water from traffic, cars park at the top of the hill and hike down to the beach. A shuttle bus down to the beach is available for a $1 fee. Before visitors hike to the beach and surf, they must watch a ten minute video explaining the importance of protecting the reef and marine life. Snorkel equipment rentals are available at the Preserve.