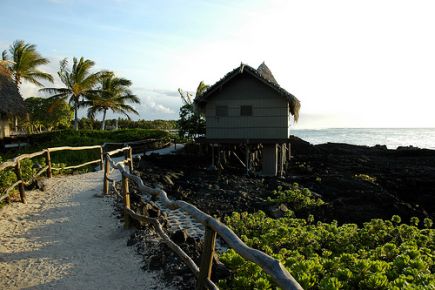 An archipelago with active volcanoes, lush green scenery, deep canyons, plunging waterfalls and plenty of pristine white and black sand beaches, Hawaii has long been a favorite getaway destination for many. However, Hawaii’s relatively isolated location in the middle of the Pacific Ocean and many high-end resorts have made it a not entirely inexpensive place to vacation. However, crashing stock markets, the credit crunch and the overall poor economy have kept many vacationers stuck on the mainland—which means many resorts are having to pull out some pretty fantastic deals to encourage travelers to shell out the cash and get to the islands.

One of the resorts giving a pretty fantastic offer is the Kona Village on the big island. For years, Kona Village has been known as one of the few all-inclusive resorts on the islands—the resort rents luxury bungalows and wraps into the price three daily meals (not including drinks). For the standard bungalow, you pay $660/night for two people (making it about $330/day for all food and lodging). While certainly not cheap, it also isn’t such a bad price for a luxury resort with a giant golf course, numerous beaches, pristine grounds and excellent meals.

And it gets even better. Starting immediately, those who book their stay in the Kona Village for at least 5 nights will get an $800-per-villa (read: not per person) airfare credit to compensate for your travel to Hawaii. If you use frequent flier milers to go, you still get the $800 back, meaning you could potentially knock the price of you villa considerably.

Prices on flights to the islands have also been way down, meaning if you score cheap tickets to Hawaii you could potentially have money leftover from your $800 airfare credit (which of course could be used to have more fun or buy mai thais at the resort).

If you aren’t already drooling at this amazing deal, the Kona Village is also including 4 complimentary spa treatments, 4 complimentary rounds of golf and big discounts on your room rate if you book more than one room. Free massages and golf rounds AND an $800 airfare credit? It almost sounds too good to be true. (Kona Village is also considered one of the best golf courses in Hawaii)

While still a fantastic deal, if staying at the Kona Village is still out of your budget, there are plenty of cheap hotels in Honolulu offering up great discounts like free nights and up to 40% off at some hotels.

For those on a super tight budget, you can still enjoy a Hawaiian vacation and take advantage of the cheap airfare to the islands and stay at one of the hostels near Waikiki or even camp on the beach on Kauai. For those who still want to stay on the Big Island near Kona, there are plenty of great hotels near Kona (many of which are also offering special discounts).