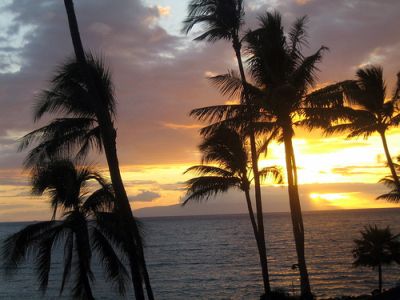 Sometimes the most torturous part of working for a travel company is that you are constantly bombarded with really incredible travel deals, only a few of which you are ever actually able to take advantage of. And, while I’m certainly not complaining about living and breathing travel every day, it sure can make you want to pack up your suitcase and head out on an adventure of your own sometimes. Especially when you see amazing deals to some of your favorite destinations.

This week, I wrote about some of the fabulous fall specials in Hawaii right now. While fall has traditionally been the more affordable time to head to the islands (Hawaiian Airlines rep Keoni Wagner told me in an interview last year that shoulder seasons—fall and spring—are the best time to get the cheapest flights to Hawaii), the deals this year are especially good.

With the recession curbing many people’s travel plans, some more “luxury” destinations like Hawaii and Vegas have been especially hard hit. In fact, Hawaii has hit record lows in hotel occupancy in the past few weeks. And with far fewer people traveling to the islands this year, that means lots of empty hotel rooms—which in turn means lots of specials, discounted rates, free nights and other promotions to lure visitors to the isles. Accommodations that may have been way out of your league price wise just a year or two ago now seem to be among the cheap Hawaii hotels that you can actually afford.

Last week, the New York Times published, “Travel Deals: Fall Sales in Maui,” which outlined some of the great sales happening at hotels on the island this fall. In fact, some of the Maui hotel deals were so good I was really tempted to take advantage of the low fares to the islands and the new direct flight from Portland to Maui and plan a little autumn getaway to the islands. The year-old Honua Kai Resort and Spa is actually offering rooms for 50% off through December 12. The deal is valid for one and two-bedroom stays between September 1 and December 12. Rates start at $225 a night based on double occupancy.

If you’ve never been to the islands and want to take advantage of all of the great deals in Hawaii right now, you may also be able to check out numerous islands for a lot less than usual. As it turns out, there is a major fare war raging between several airlines on inter-island fares. Hawaii magazine is reporting that Hawaiian Airlines, Mokuele Airlines and go! have all announced deals on September travel in attempt to lure more island hoppers onto their flights versus the competition.

Hawaiian Airlines and go! are both offering a la carte one-way inter-island flights for $24.99 and Mokuele Airlines is offering a Jet Blue-style all-you-can-fly pass for unlimited interisland flights for the month of September for just $299. This means you could easily take advantage of the great deal at the Honua Kai Resort in Maui and then hop over to Oahu, where there are plenty of Honolulu hotels offering up great specials.

Even the super luxe and recently renovated Royal Hawaii hotel in Waikiki is offering discounted rooms for about $300/night (that may still sound expensive, but it’s a lot cheaper than rooms in this posh hotel usually go for. If this special is still way out of your budget, there are some other hotels in Waikiki offering up specials. The Aston Waikiki Beach is currently offering three nights for the price of two, making it possible to get 3 nights for $310, including all taxes and breakfasts. There are also other 4-star Waikiki hotels offering up rooms for as little as $120/night.

If you are still hoping to book a last-minute Labor Day getaway, it is not too late to score a great deal to Hawaii for an impromptu long weekend at the beach. According to “How budget-friendly is a last-minute Labor Day trip to Honolulu” in the Los Angeles times, hotel occupancy throughout Hawaii has hit record lows, which means for some great last-minute travel opportunities for bargain hunters. In fact, Orbitz ranked Honolulu as the 4th best Labor Day weekend destination in terms of savings to be had and great deals.