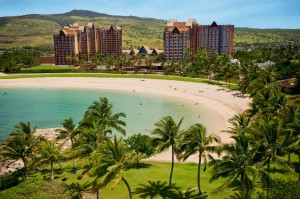 Disney’s first Hawaii resort opened on August 29th with a lei untying ceremony at sunrise, attended by Mickey, Minnie, and hundreds of Disney fans. Guests checking in to the new Aulani resort today were personally greeted as their names were announced, and escorted into the grand lobby.

Local and national media provided coverage of the opening, including KITV4, KHON2 and this photo slideshow by Hawaii News Now and MSNBC.

Built on 21 ocean-front acres along the western coast of Oahu, Aulani strives for a blend of Disney Imagineering and a sensitivity to local culture. The resort will feature Hawaiian touches such as a lo’i (taro patch), a layout designed to resemble a traditional ahupua’a district from the mountain to the ocean, and Hawaiian artwork throughout the property.

Guests will be able to enjoy four restaurants, two lounges, a spa and teen spa, fitness center, cooking courses, and other amenities. Families will enjoy character appearances in the dining rooms, a private snorkel reef, pools, and lazy river, as well as Aunty’s Beach House, where kids will be able to learn about Hawaii’s culture with Disney youth counselors.

Guest rooms at Aulani start at $399 per night, with a Kama’aina discount of 25% extended to Hawaii residents. For details, please visit the official Aulani website.

The restaurants, lounges, beach and pools will be open to the public, however there are features (such as the slides and lazy river) that will be reserved exclusively for guests and Disney Vacations owners.

Here is a cool time lapse video of Aulani being built from the ground up:

And from all the way back in 1937, here’s a Walt Disney short called “Hawaiian Holiday”: