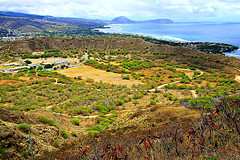 Diamond Head Crater is the remnants of an extinct volcano that erupted hundreds of thousands of years ago. It is located in Waikiki on the island of Oahu, Hawaii. It gets it name from British sailors who found calcite crystals in the lava and were happy to assume it was diamonds that they had discovered.

The Hawaiians called it Le’ahi, which means “brow of the tuna” for the shape of the crater. Diamond Head crater is one of Oahu’s most visited tourist attractions and should not go unvisited by any traveler to Oahu, Hawaii.

The crater is over 3,000 feet in diameter with a 760 foot summit. Standing atop the crater nearly the entire island of Oahu is revealed. Sandy beaches, towering cities, and several valleys can be seen and give anyone a sense of appreciation after the moderate hike, which typically takes about an hour and a half to two hours.

The hike to the top of the crater is a 1.6 mile roundtrip. The first .2 mile distance is paved, but after that the terrain is a bit rockier, although you will still see people hiking in flip flops! The last leg is a series of rather steepstairs that take you to the top where you will certainly want your camera.

What to Bring
A bottle of water, camera, and a pair shoes meant for hiking. A snack and sunscreen may be desired as well. A fee of $1 per person or $5 per car is collected upon entering the park.

When to Go
A clear day, earliest in the morning. The later in the day you choose to go, the more crowds you will encounter. Depending on the time of year you visit Diamond Head the views from the top will change. The park can be accessed during business hours, from 6:00 am to 6:00 pm daily, including holidays. If you are planning to do the hike, make sure you begin by 4:30pm sharp or you will be denied access to the trail.

Insider tip: One of the most popular days to visit is on Saturday when Kapiolani Community College holds Oahu’s largest farmers market right near the entrance to the park.

Love this video with shots of the hike as well as the view from the top of the crater:
(As well as the song by Hawaii’s own Jack Johnson.)