Many people who come to Oahu choose Waikiki as their homebase. And for good reason! There is no shortage of things to do in Waikiki, public transportation options mean you won’t even need a rental car, and world class beaches are just steps from most accommodation on the two mile strip. But if you have the time, a great way to experience a more authentic Hawaii is to get out of Waikiki and visit other parts of the island. Here are several ideas for day trips that can be easily done from Waikiki and Honolulu.

Big Waves on the North Shore 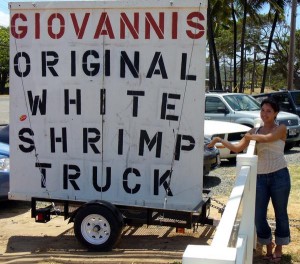 Probably the most popular day trip from Honolulu would be a drive to the North Shore. If you’re visiting in the winter, you will catch the huge swell that brings all the big wave surfers to the North Shore’s famous beaches. You have two options for how to get there, the quickest (but least scenic) being via the H1 freeway, then the H2 headed to Haleiwa.

It’s much prettier to take the Pali Highway out to the windward side (Kailua/Kaneohe), possibly stopping at the historic Pali lookout. Once you’ve reached Kaneohe, continue up Kamehameha Highway past the famous shrimp trucks in Kahuku – if you’re hungry, you won’t regret stopping for a plate of the hot, garlic-heavy shrimp scampi with rice served by these old-time wagons. (My all time fave is Giovanni’s!)

Once you reach the North Shore, you’ll be able to see world class surf breaks such as Waimea Bay or Pipeline, home to some of the most prestigious surfing contests in the world. Visit the Dole Pineapple Plantation for their amazing outdoor maze and a sample of the famous dole whip. A visit to the North Shore would not be complete without a stop at Matsumoto’s Shave Ice to cool down with this Hawaiian treat.

Some who travel to the North Shore choose to stop at the Polynesian Cultural Center on the way, in the little town of Laie. Others choose to take tours that leave from Waikiki, which means you will just be headed straight out and back (and it’s quite a drive) to Waikiki. By renting a car and making it a day trip, you can break up some of the drive time with little stops along the way where you feel like it, such as the Pali lookout or Kailua if you’ve taken the Pali Highway, or Bishop Museum or Kaneohe if you’ve taken the Likelike Highway.

Just a short drive from Waikiki is one of Honolulu’s most interesting neighborhoods. Within a few blocks, you can see bustling ethnic markets in Chinatown, which give way to the skyscrapers of Honolulu’s downtown financial district, right next to historical landmarks such as Iolani Palace, Kawaiha’o Church, and the Mission House Museums. Because of the proximity of this daytrip, as well as the easy accessibility via public transportation, this is an easy day (or half-day) trip to build into your itinerary. It’s also a popular stop on organized tours of Honolulu.

>> Chinatown is especially lively during the period before and during Chinese New Year, which falls in early February.

A popular way to start your day trip to Oahu’s east side is to get up early and do something active! Hiking Diamond Head or Koko Head crater before the sun gets too brutal, or visit Hanauma Bay for some of the island’s best snorkeling. Stop for lunch in Hawaii Kai at Kona Brewing Company, The Shack, or any number of little restaurants with a marina view. As you continue your drive up Kalanianaole Highway, the scenery changes dramatically! Stop at the Halona blowhole lookout before spending some beach time at Sandy Beach or Makapuu. During whale watching season, you can often see whales along this stretch of coastline.

Catch a Gorgeous Sunset on the Leeward Side

If you’re looking to get off the beaten path, the west side of Oahu may just be your best bet. Although it’s now a bit busier thanks to the resorts at Ko Olina, you will still run into far less tourists and experience a more authentic glimpse into what it’s like to live in Hawaii. Beaches on this side of the island are more remote and uncrowded, and you’ll find some great surfing or snorkeling – depending on whether the surf is up or down. It’s possible to follow Farrington Highway all the way up the Waianae Coast to reach this area. You can hike by foot from Yokohama Bay to Ka’ena Point, then up to the North Shore side. Whatever you do, make sure to catch the sunset when you’re out in this area. As the westernmost part of the island, it’s one of the best spots on the island for watching the sun slip into the horizon.

If you’re a foodie or a seafood lover, one of the most unique things to do on a visit to Honolulu is to get up early and watch the Honolulu Fish Auction in action. Six days a week, this auction site bustles with thousands of pounds of fresh fish unloaded directly from the docks outside. Representatives from the island’s best restaurants will be on hand each morning to snap up their share of the freshest fish available. This is definitely an early morning day trip, as the auction gets started at 5:30am sharp. After you’ve seen enough, Nico’s at Pier 38 is an excellent casual restaurant just steps away where you can get yourself a delicious breakfast. Try the catch of the day & eggs! Yum.

>> More about the Honolulu Fish Auction