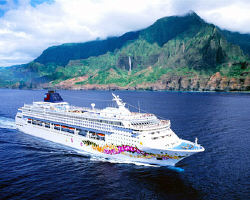 When most people think of taking a cruise, they’re thinking of a beautiful tropical destination – but if Hawaii is included on a cruise itinerary it’s usually one of many stops along the way. If you want a taste of Hawaii as well as several other tropical locations, that will work out just fine – but it won’t give you a real feel for more than one port city.

If you’d like more variety in your Hawaii cruise than just a stop in Honolulu and a day spent on Waikiki Beach, then try a cruise that concentrates solely on Hawaii. The trips from port to port won’t be as long, so you’ll have even more time to spend in the city enjoying the sights and activities, and you’ll get to visit several of the islands and the most popular port cities. Plus, rather than trying to book a different hotel in each city you want to visit and then having to fly from island to island to get to them, you unpack just once and let the cruise ship get you from place to place!

Hawaii cruise vacations tend to last from one-two weeks, and generally stop at port cities on Oahu, Maui, Kauai and the Big Island. Several different cruise lines offer cruises that just focus on Hawaii, so you can choose the itinerary that suits you best.

On the other hand, if the idea of a full two weeks on a ship doesn’t sound appealing, you can work a short Hawaii cruise tour into your Hawaii vacation – there are cruises that include whale watching, dinner cruises, dolphin watching, sport fishing, diving and snorkeling. These kinds of one-two day trips leave from the most popular island cities, like Lahaina, Honolulu and Kailua Kona.

No matter which kind of Hawaii cruise you decide on, taking to the water for part of your vacation in Hawaii is a great idea – these are islands, after all!