Gift Ideas for the Hawaii Lover 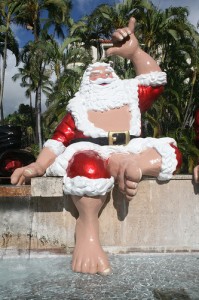 Dreaming of a White Christmas, are you? Well, in Hawaii you definitely won’t be finding one of those! (With the exception of the snow atop our volcanoes, but that’s another story entirely.)

Here in Hawaii, Santa arrives in a canoe (really!) and although we celebrate just the same as anywhere else, many visitors from colder locales say that enjoying the holidays here is a completely different experience. How’d you like to say you spent Christmas in your bikini? Well you can, here in the islands.

If you’ve got a Hawaii-lover on your Christmas list, here are a few gift ideas that are sure to please:

Because of its multi-cultural heritage, Hawaii has a vibrant and diverse culinary scene. Many foods popular in the islands today trace back to the sugar plantation days or beyond. This book is a fascinating look at the foods of Hawaii, including history and recipes.
Our pick: The Food of Paradise: Exploring Hawaii’s Culinary Heritage
Other choices: A popular local spice mixture, li hing powder, coconut syrup, or world famous kona coffee.

For the sports fan

Hawaii doesn’t have any professional sports teams, but that doesn’t stop the people here from being passionate about sports. It just means that we root even harder for our hometown college teams, the largest of which is the University of Hawaii. Tailgating at a UH home game is practically mandatory here to call yourself a true fan, and many families on the outer islands will get together for a potluck style BBQ in order to watch the game where one family has it on pay-per-view.
Our pick: University of Hawaii Sweatshirt

Paul Theroux’s Hotel Honolulu remains one of my favorite books that take place in Hawaii. Although not the most authentic glance into island life, this satirical story takes place in Waikiki and entertains the reader with a crazy cast of characters, many of which are actually pretty typical if you spend time people watching in Waikiki.
Our pick: Paul Theroux’s Hotel Honolulu
Other choices: The classic Hawaii: A Novel by James A. Michener or Mark Twain’s Letters from Hawaii.

To help your Hawaii-lover get a jump start on planning their next getaway, why not choose a guidebook for them? There are many on the market, so you can take your pick of the individual islands or a general book to cover the whole state. I recommend Frommer’s Day by Day series for the variety of itinerary suggestions that they’ve included.
Our pick: Frommers Hawaii Day by Day
Other choices: Lonely Planet Hawaii or a guide to individual islands, such as Maui Revealed.

You may have heard Israel Kamakawiwaole’s haunting medley of Somewhere Over the Rainbow/What a Wonderful World – it’s become an international hit and has been featured on TV, movies such as Meet Joe Black, and radio worldwide. Since his death in 1997, Iz’s popularity has never faded and has only grown stronger.
Our pick: Israel Kamakawiwaole: Facing Future
Other choices: Get in the mood with Christmas songs by popular local musicians such as Christmas Day in Hawaii Nei by the Makaha Sons or Christmas Gift by Na Leo Pilimehana.

For the film buff

It’s admittedly a bit cheesy, but Blue Hawaii can make any Elvis fan wax nostalgic. The 1961 classic puts a Hawaiian backdrop to the King’s most popular hits, including Can’t Help Falling in Love.
Our pick: Blue Hawaii
Other choices: So many movies have been filmed here in Hawaii. Try Pearl Harbor, 50 First Dates, surfing themed North Shore, or the newer release Princess Kaiulani.

For fans of the small screen

Although we’ve had a variety of television shows that have filmed here in Hawaii, perhaps none has captured audiences the way that LOST did. For the LOST fan, here’s a complete box set so they can get lost all over again.
Our pick: LOST complete series box set
Other choices: While the new version is a hit today, go retro with the Jack Lord classic Hawaii Five-0 or Magnum PI.

A little bit of kitsch

Need some company for your next road trip? Who doesn’t need a classic bobble-head hula girl, right? =) Watch those hips sway!
Our pick: Dashboard Hula Girl
Other choices: For your next luau-themed party, why not try an inflatable palm tree drink cooler or solar powered tiki torches!

And of course, the best gift of all would be a trip to Hawaii! Start your search with airfare deals to Hawaii.