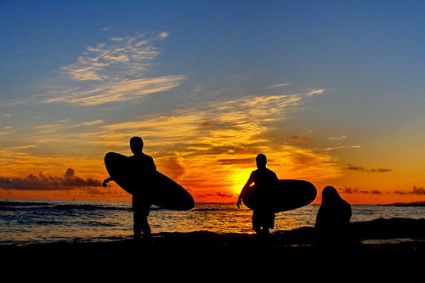 Although Hawaii’s premier surf competition takes place at the famous Pipeline on Oahu’s North Shore, Oahu also has some terrific spots for beginner surfers who are trying to learn how to surf in Hawaii. While the scenes from Blue Crush and the oh-so-cute-surfer-girl Kate Bosworth pounding her head against coral in Oahu might scare you away from trying to learn how to surf in Hawaii, it turns out that there are plenty of great spots with baby waves and Honolulu is chock-full of people willing to charge you to teach you how to surf, you should have no problem attempting to stand up on that board for the first time. 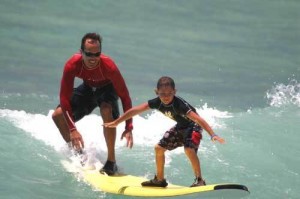 Canoes, near Waikiki, has been a long-time learner’s hot spot on Oahu. Known for its easy-to-ride waves and friendly learner’s vibe, it has the reputation of being the place to try out surfing for the first time. However, it is also almost always crowded and you may find yourself trying harder to avoid other inept surfers as trying to catch the ever-elusive perfect wave. Luckily, there is another great learning spot not very far from Waikiki with a whole lot less bodies and boards.

A great spot about a 40 min drive from downtown Honolulu is White Plains Beach (aka Kalaeloa), which was formerly a part of Barber’s Point Naval Station, but is now open to the public. The break here is nearly identical to Canoes with a lot fewer people. The beach also attracts everything but an eastern swell and has consistent surf year-round. The waves here are notoriously easy to catch for beginners and if you paddle far enough out you may even get lucky enough to catch a 100 yard ride into shore (ok, maybe not on your first day out, but it can be done). Pro surfer Jason Shibata credits White Plains as the place that taught him how to surf. 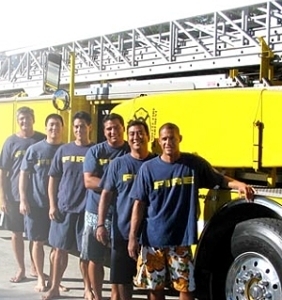 If you want some advice before trying to paddle out on your own, there is also a great surf school that will not only give you a lesson, but will provide you transportation to White Plains from Waikiki. HawaiianFire Surf School (aptly named after the group of local firefighters who give the lessons) offer both group (3:1 ratio) and private (1:1 ratio) lessons. These fire fighters guarantee to have you up and surfing in the first 1.25 hours of your lesson. Another added bonus? Fire fighters are trained paramedics, so if knock yourself out on your own board (something that would most definitely happen to me) the same guy giving you your lesson can bring you back to life. Reservations recommended.

Directions to White Plains Beach
1. H-1 West to Kapolei Exit #2
2. LEFT turn going South on Fort Barrette Ave, pass the hospital (right) and school (left)
3. LEFT on Roosevelt Rd, immediately after the abandoned guard shack
4. RIGHT on Coral Sea Rd, fourth RIGHT
5. LEFT on Tripoli St, past the airport on the right–look for the sign to the Shore Shack
6. Park and surf!