The island of Oahu has many great beaches, but it gets a little technical when you talk about where they’re actually located. The City and County of Honolulu actually contains of the entire island of Oahu, so when you talk about beaches in Honolulu, it kind of depends. Locals would probably consider Honolulu beaches the ones that are in Waikiki and around that area, so this post will focus on beaches on the south shore of Oahu. 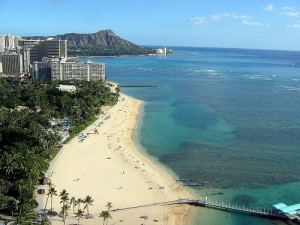 Waikiki Beach – Of course you couldn’t talk about beaches on Oahu, or beaches in Hawaii for that matter, without mentioning the most famous of them all – Waikiki Beach. You’ll find miles of white sand in Waikiki, perfect for lounging around, taking a beginner surf lesson, or just getting in the water. You’ll find many surf breaks in this area and locals will often refer to the part of the beach that you’re on by the names of the breaks. Visitors may find it helpful to take note of which hotels you’re in front of, in order to get your bearings.

Ala Moana Beach Park/Magic Island – Ala Moana Beach park is another popular beach, located directly across Ala Moana Shopping Center. There’s a nice 2 mile jogging path around the park (3 miles if you include “Magic Island” just past the large parking lot) and you’ll often see families setting up barbecues or picnics on the weekend, so plan accordingly. During holidays like 4th of July or Memorial Day, people will camp overnight just to secure the best spot to set up.

Kaimana Beach/Sans Souci Beach – Located across from Kapiolani Park and next to the Natatorium, Sans Souci Beach or Kaimana Beach Park or “Kaimana’s” is a local favorite. Throughout the day, you can watch recreational swimmers heading out to the “windsock” which is a nice 200 meter swim from shore. Because of the location directly across Kapiolani Park, you’ll also see runners cooling off with a dip in the ocean after a nice run around the park or Diamond Head.

Hanauma Bay – While not technically a beach, per se, Hanauma Bay is a great choice for those interested in snorkeling because of its status as a marine preserve, as well as the calm waters. You can get further details from our Hanauma Bay article or the official website.

>> For more info on Oahu beaches, including North Shore beaches, Windward beaches (east), and Leeward beaches (west), see this article.
>> For other Hawaii Beaches around the state, click over to our Beaches of Hawaii page.
>> Not the beach bum type? There are plenty of other Things to Do in Hawaii!